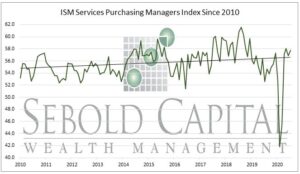 The ISM Non-Manufacturing Index helps determine the overall economic strength of the services sector.  Components evaluated are employment, business activity, new orders, and supplier deliveries, which are then compiled into an index.  The nonmanufacturing sector represents a much larger share of the overall U.S. economy when compared to the manufacturing sector, making up approximately 80%; the sector’s economic weight makes it an important sign of growth, stagnation, or contraction. Readings above 50 indicate expansion while readings below 50 signal decline.

In September, the ISM Non-Manufacturing Index, recently renamed the Services Purchasing Managers Index (ISM Services PMI), increased by 0.9 points to 57.8 from the August figure of 56.9. This increase of 1.28% represents the fourth consecutive month of growth for this index, which had been growing continuously for 128 months prior to April’s and May’s contraction. Although this 1.28% jump is significantly smaller than the growth rates observed a few months back (there was a 25.8% increase between the months of May and June), it falls more in line with previous monthly increases, a sign that we are returning to some sort of economic normalcy after the aforementioned contraction. The Supplier Deliveries Index, which is the only index that is inversed, registered a 54.9 figure (a decrease of 5.6 percentage points from August’s reading of 60.5), this past month indicating that the economy is improving, and customer demand is rising

Most of the industries reported on the index experienced growth in September, including utilities, transportation and warehousing, wholesale trade, real estate, and construction. The only industry to report a loss was the professional, scientific, and technical services industry. Despite these overall positive figures, most respondents reported that they expect some level of uncertainty as we move into the fall and winter months, not only from the usual variables at play, but also from some less common factors such as the presidential election, recent civil unrest, and the impact of COVID-19. 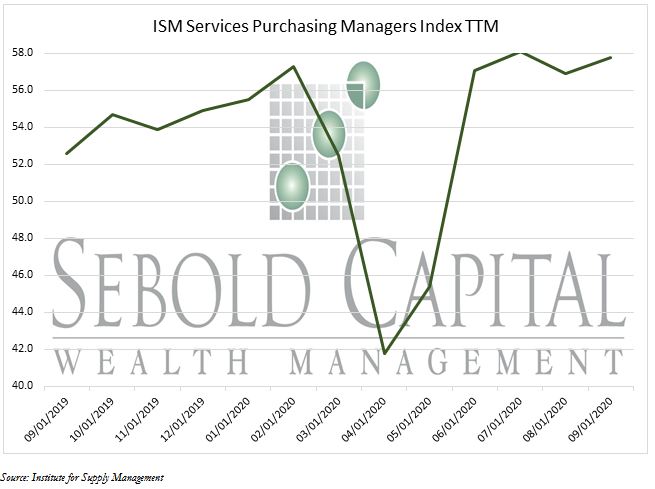