One of my most despised words over the past five years is “unprecedented.”  The word has been used so much that I’m pretty sure its true definition has become “normal.”  “Unprecedented” times have now become “normal” times.  At least it seems so.

The first real piece of economic data is in on the “COVID-19 economy” and that is the jobs report.  We can look at it a couple of different ways.  The line chart below is always the most dramatic.  The number of jobs lost has been “unprecedented.”  It is not a pretty picture, but it is not out of the realm of expectations.  The next report will probably be larger.

If we instead look at this as points in time, you might get a different feeling over the same data: 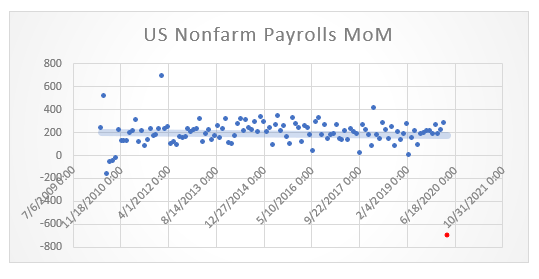 Make no mistake about it, the data is bad, but as the second chart shows, this is a point in time.  And the next data will also be a point in time.  I do not mean to minimize the impact of this virus on the economy, but I do want to emphasize that this point in time will pass, and we will start to see economic improvement.  The trick question is when.

The timing on this is difficult for several reasons.  First, there are many things we need to know that are inherently unknowable.  The US economy is driven widely by the consumers.  That is why the jobs data is so important.  If everyone has a job, then they are all generating income and can therefore spend money on goods and services in the economy.

Right now, we are living in an economy that has been literally shut down by government to help stop the spread of the COVID-19 virus. The businesses that have been forcibly shut down – restaurants, bars, movie theatres, etc., literally have no income.  Without income, it is very difficult for them to continue to pay their employees without creating a massive pile of debt on their balance sheets that they may never be able to recover from.

I would argue that this is very different from an economy that just had too many workers, was slowing down and therefore had to let go of people from the payroll. Which scenario will recover quicker? That is the big question.  A standard economic slowdown has different metrics that one looks at; overall economic growth, interest rates, global competitiveness, tax policy, etc.  These are hard to pin down, and impact the overall economy, more or less, equally.

This slowdown is a government caused slowdown.  Can they push the gas pedal on the economy when the danger is over?  The government has responded in the only way they could respond; by pumping cash into the economy in the hopes that it gets to the people who need it the most.  When the governors of the states sound the “all clear” siren, there will be an awesome rush to spend funds in places the economy was deprived from. (There is only so much time that you can binge watch Netflix.) Will it be enough, and will it be sustainable?  These are the questions that are currently difficult to answer.

Second, how are the “stimulus” packages that the government has put in place (or is contemplating) putting in place, impact the overall economy.  We can view this from several different perspectives.  When we talk about “stimulus” we always go down the road of monetary policy. Milton Friedman has said that inflation is always and forever a monetary policy issue.  Can we create trillions of new dollars, shove them into an economy, and expect prices not to change?  If the demand for services is low because of social distancing, how will these additional dollars be used?  Will the hospitality industry that just lost 459,000 jobs, be able to come back quickly when the all clear flag is raised?

The longer-term question is how the US will handle the additional debt that they are building up to create these programs.  $2.2 trillion is a lot of money.  For perspective, if we were to pay it back at a rate of $100 per SECOND, with no interest costs, it would take us almost 700 years to pay it back.  That’s not just mortgaging our generation, but seven generations into the future.   And just wait for the stories about how the money was wasted and went to the wrong businesses.  It just might have been simpler to send a check for $6,000 to every citizen in the US and call it a day.

What seems to make this manageable right now is that interest rates have fallen to such a low point, that the interest expense on US debt will probably go down in the near future, even though the dollar amount is higher.  You can think of this as a REALLY LARGE cash out refinance for the US house; our debt will be higher, but our payments will be lower.  It would really behoove the Federal Reserve to lock in this interest rates for a really long time, by issuing longer term 50 or even 100-year notes.  I have heard it is being contemplated, but no news yet.

Third, this business shut down is having very different impacts on different industries.  I alluded to this earlier, as the employment data below show.  Leisure and hospitality have taken the brunt of this, followed by education and health service, and professional business services.  The only sectors that were additive were mostly government services.  Information technology, utilities and wholesale trade have also largely been spared the carnage.

We do not anticipate that these numbers will get better, but worse in future reports.  There are almost 60 million people in the hospitality sector.  The unknowable question here is how fast we can get these industries back up and running, at some minimal level.  And will the increased unemployment benefits be enough to keep them going while they are shut down? 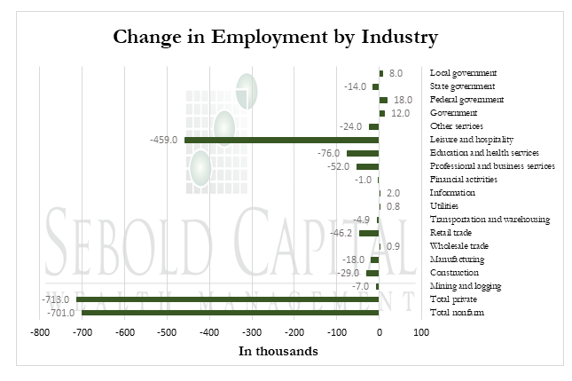 Where do we go from here?  I am reminded of a quote by Shelby Davis when he said that he made most of his money in bear markets, he just didn’t know it at the time.  We have seen some dramatic valuation changes in the markets.  Have they been too much or not enough?  If we had a clear answer to the questions above, we could easily answer this question.  But we don’t – so we must tap dance a bit because we don’t know the absolute answer.  Here are some things that we do know.

First, there are many businesses that are doing quite well in this environment.  Large grocery stores, technology companies, communications companies and content companies; all doing very well on the top line. We do not know how the bottom line will show up.  The markets have, for the most part, sold off en masse, without much rhyme or reason.  Was this thoughtful thinking or immediate panic? I’m not sure the later is a good investment strategy.  Also keep in mind that when we see massive price changes in short period of time, people generally do not sell because they want to, but because they must.  Again, not a great investment strategy.

So, is this the bottom?  Probably not, but I do believe we are closer to a bottom than we are a top.  My hope is that virus data come in better than expected and business begins to open again.  At that point, we can begin to look at valuations of company based on future income growth, not just income.

On an optimistic note, we do live in one of the most dynamic, diverse, robust countries on Earth.  When there is a problem to be solved, this country mobilizes very quickly to handle it.  In today’s communication age, there are a lot of armchair quarterbacks, but we are seeing results.  Companies are changing their businesses to make respirators.  New hospital rooms are being quickly assembled where needed.  New tests are being developed in record time.  Vaccines are in the works as we speak and could be ready within a year.  We will not do this perfectly, but we will get it done.  The tone of this sixty days from now, will be much, much different.

We may want to change the lyrics to the REM song: “It’s the end of the world as we know it—and we will be fine”.