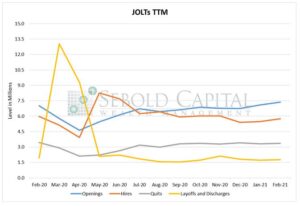 In February, new hires increased by 5.0% to 5.7 million, however, total separations grew by 2.50% to 5.5 million, leading to a positive net change in employment of 282,000 for the month. Layoffs increased by 2.9% totaling 1.8 million, while the number of people who left their jobs voluntarily rose by 1.5% to 3.4 million. Job openings also increased in February, growing by 3.8% to 7.4 million—the highest reported number since October 2019.

February’s JOLTs report showed mixed, but overall positive, results for the labor market. While more workers were hired and more vacancies were created, layoffs continued to increase as well. However, the number of quits remained higher than the number of layoffs and discharges, which is a positive indicator. Generally, when a worker chooses to voluntarily leave a job, it can be assumed that they have enough confidence in the future of the economy and the labor market to believe they can find a new one with relative ease. The labor market tightened slightly in February, with the corresponding ratio increasing from 0.70 to 0.74. This means that there are roughly 74 jobs available for every 100 people that are considered to be unemployed. For reference, the labor market tightness ratio was 1.23 shortly before the pandemic, meaning that the number of vacancies actually exceeded the number of unemployed individuals. Overall, February’s JOLTs report shows that the labor market largely continues to move in the right direction. As more people are vaccinated and the remaining restrictions are rolled back, the labor market will likely maintain its trajectory to pre-pandemic normalcy, which will keep driving the economic recovery. 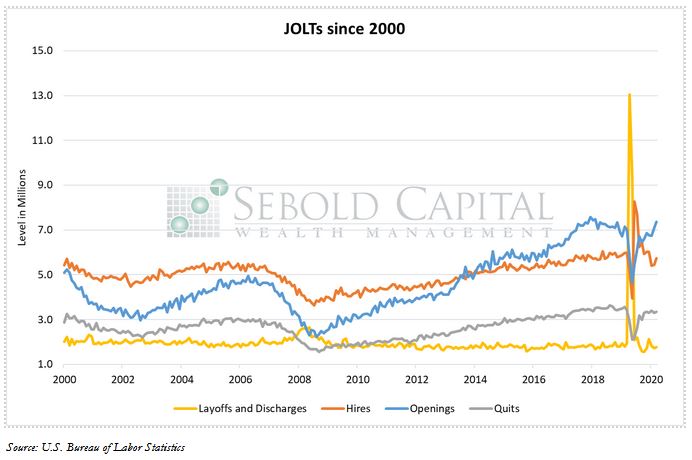