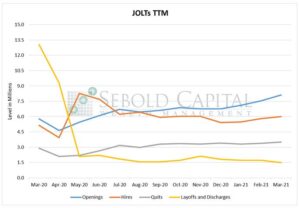 In March, new hires increased by 3.7% to 6.0 million and job openings surged by 7.9% to 8.1 million. Total separations decreased by 1.9% to 5.3 million, with the number of people leaving their jobs voluntarily rising by 3.7% to 3.5 million and layoffs declining by 14.1% to 1.4 million. The changes in hires and total separations yielded a net gain in employment of 687,000.

March’s JOLTs report further highlighted an ongoing trend in the labor market. The number of vacancies rose to an all-time high and continued to outpace the number of new hires for the ninth consecutive month. Layoffs declined to their lowest level since the beginning of the pandemic, while voluntary separations increased. Generally, when a worker chooses to leave a job voluntarily, it can be assumed that they have enough confidence in the outlook for the labor market to believe that they can find a new one with relative ease. The labor market continued to tighten in March, with the corresponding ratio increasing from 0.75 to 0.84—the highest level in a year. This means that there are roughly 84 jobs available for every 100 people that are considered to be unemployed. For reference, the labor market tightness ratio was 1.23 right before the pandemic hit, meaning that the number of vacancies actually exceeded the number of unemployed individuals. The record-high number of job openings indicate that employers are looking to expand their workforce in order to meet the rising consumer demand. However, unemployed individuals are not taking these available jobs, as evidenced by the stubbornly high unemployment rate. As a result of the additional unemployment benefits, it is more profitable for many of these individuals to be unemployed than to be working. While the labor market keeps moving in the right direction, there will continue to be slack from the supply side as long as these expanded unemployment benefits persist. 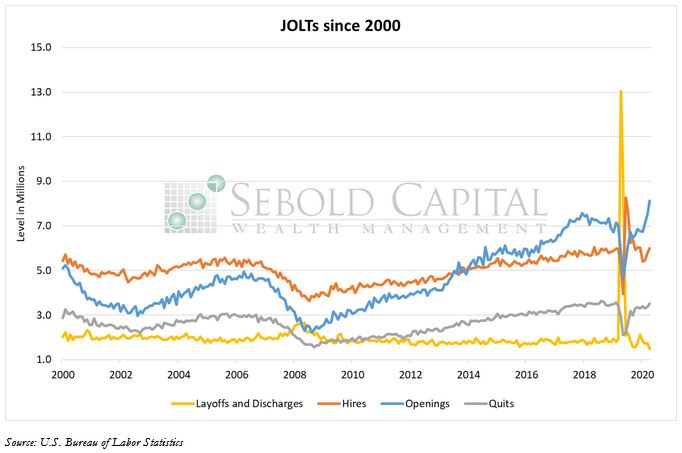