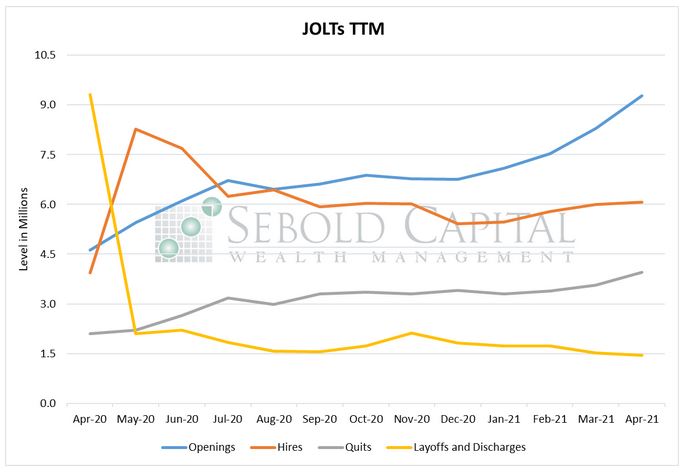 April’s JOLTs report continued to highlight an ongoing—and rather concerning—trend in the labor market. The number of vacancies rose to another record-high and outpaced the number of new hires for the tenth consecutive month. Businesses are finding it increasingly difficult to attract and retain workers, as expanded unemployment benefits and generous fiscal stimulus from the Federal Government have made it more profitable for many individuals to be unemployed than to be working. The number of layoffs and dischargers also declined to an all-time low as businesses try to hold on to the workers they have. Voluntary separations likewise rose to a record high. Generally, when a worker chooses to leave a job voluntarily, it can be assumed that they have enough confidence in the outlook for the labor market to believe that they can find a new one with relative ease.

The labor market continued to tighten in April, with the corresponding ratio increasing to 0.85 to 0.95—the highest level since February 2020. This means that there are roughly 95 jobs available for every 100 individuals who are considered to be unemployed. For reference, the labor market tightness ratio was 1.23 right before the pandemic hit, meaning that the number of vacancies actually exceeded the number of unemployed individuals. Vacancies seem to be on track to exceed unemployment once again, but for different reasons this time. Many unemployed individuals now have essentially no incentive to find a job, especially those who would otherwise be working an entry-level or service job. Consumer demand keeps rising, and businesses are struggling to meet that demand due in part to the current labor shortage. This has led to supply chain disruptions and upward pressure on prices, which are likely to persist until the additional UI benefits have expired. 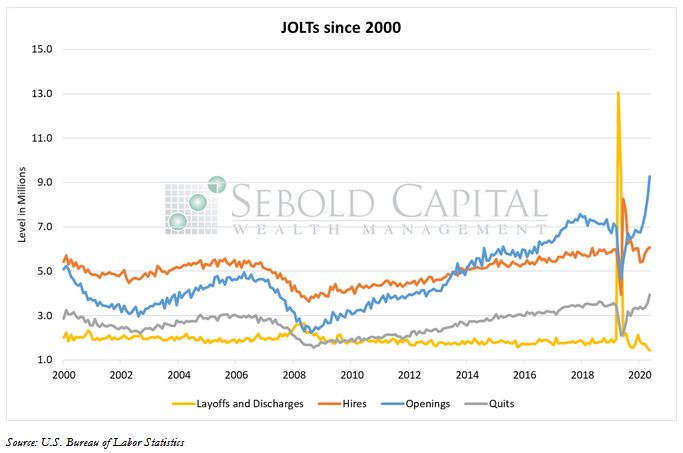