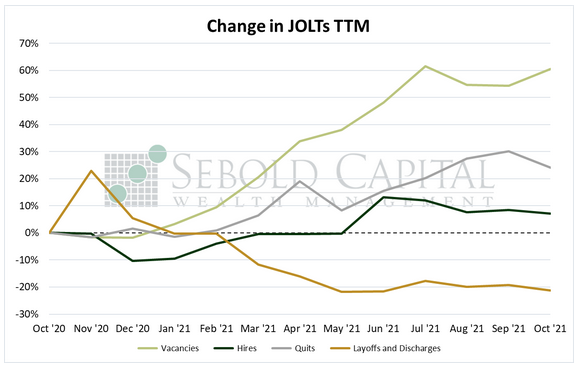 In October, vacancies rose by 4.1% to a near-all-time high of 11.03 million, while the number of hires declined by 1.3% to 6.4 million. Total separations fell by 4.1%, with the number of people voluntarily leaving their jobs declining by 4.7% to 4.2 million and layoffs decreasing by 2.5% to 1.4 million. The changes in hires and total separations yielded a net gain in employment of 572,000 for the month.

The number of job openings in the U.S. rose above eleven million for the second time ever, and it nearly reached its all-time high that it hit back in July. However, hiring failed to keep up, although it remained at an elevated level. As a result, the gap between vacancies and hires rose to a record high of 4.5 million, indicating that employers are still having difficulties filling open positions. The number of people leaving their jobs voluntarily, known as quits, declined for the first time since May. This measure serves as a proxy for how much confidence workers have in the state of the economy, as most people likely would not quit their jobs unless they were confident they could find another one with relative ease. On a more positive note, layoffs and discharges declined in October and have fallen by 21.2% since last year. This is likely the result of businesses holding onto their workers our of fear they will not be able to find suitable replacements.

As a result of the imbalance between the supply of and demand for workers, this has become the tightest labor market in history. As things stand, there are 149 jobs for every 100 unemployed individuals—or at least there were in October. Prior to the pandemic, the record had been 124 jobs for every 100 people who were unemployed. Although it is difficult to make a proper comparison given the amount of people who have left the labor force and are no longer officially considered to be unemployed. While labor force participation has seen a very modest rise since October, it is not nearly enough to offset the persistent labor shortage.

The data reveals that the shortage has been particularly pronounced in lower-wage sectors, such as leisure and hospitality, retail, and transportation. While the enhanced unemployment benefits and stimulus checks have ended, it is possible that these encouraged workers in the aforementioned sectors to seek higher wages. On the surface, this may seem like a good thing; after all, who doesn’t want higher wages for workers? However, this kind of competition between businesses for labor—the kind resulting mainly from a shortage rather than purely from increased demand—only drives up nominal wages, not real wages. This results in price pressures and falling real wages, so the long-term positive effects of this ultra-competitive labor market are dubious at best. 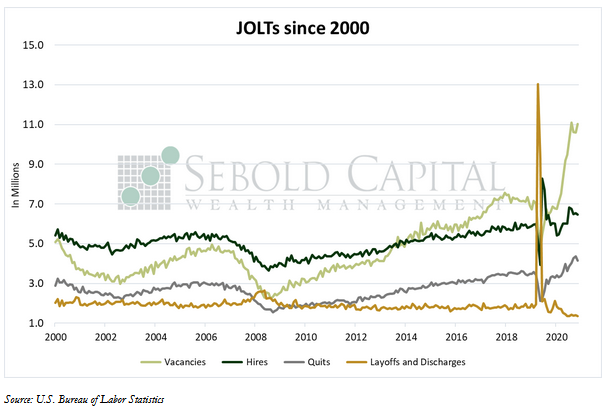