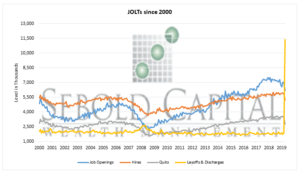 The JOLTs report is the Job Openings and Labor Turnover Survey that tracks several trends in evaluating the labor market. Through JOLTs, we can see voluntary and involuntary separations from employment in addition to new job openings and hires that have taken place.

Job openings from February to March have decreased 11.61% from 7.0 million to 6.19 million in total. Total hires have also decreased 11.22% from 5.8 million to 5.2 million. Both are indicators that opportunities for employment and the number of people being hired greatly declined as the coronavirus pandemic started to affect the U.S. economy. The number of people quitting their jobs decreased by just under 20%, however the number of layoffs increased by 516%, indicating that 11.4 million people were let go during this time frame. In result, the amount of total separations that occurred between these two months was over 14.5 million; an increase of 159% from the previous month.

The quits count helps measures a workers’ willingness or ability to leave jobs, but this increase suggests that there is confidence in the job market as individuals do not feel constrained to their current work, but this can also indicate job dissatisfaction adversely. In this case, as the number of job openings and hires slowed and decreased due to effects of the Coronavirus, the number of people quitting their jobs also decreased due to fears of job instability. People became worried that if they were to quit their current job, they would not have another opportunity to work. Sure enough, February and March marked the start of major layoffs and unemployment. Increases in layoffs mean that employers may be dissatisfied with the workers they have and no longer need them or have found ways to replace them that are more efficient. In this case most of the layoffs during these two months were direct results from the impact that the Coronavirus pandemic had on the economy. Companies and businesses were forced to cease operations or operate on limited capacity and had no other choice except to let employees go in order to stay in business. As the Coronavirus pandemic continues to impact the economy, it is projected that the levels of job openings, hiring, and quitting will stay in decline into April while the number of layoffs is expected to increase significantly. 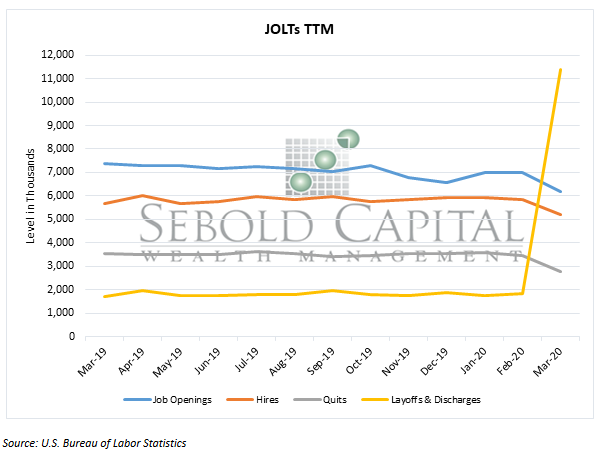