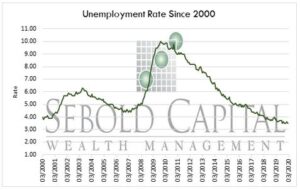 The JOLTs report is the Job Openings and Labor Turnover Survey (as of February 2020) that tracks several trends in evaluating the labor market. Through JOLTs, we can see voluntary and involuntary separations from employment in addition to new job openings and hires that have taken place.

The quits count helps measures a workers’ willingness or ability to leave jobs, but this increase suggests that there is confidence in the job market as individuals do not feel constrained to their current work, but this can also indicate job dissatisfaction adversely. Increases in layoffs mean that employers may be dissatisfied with the workers they have and no longer need them or have found ways to replace them that are more efficient. There were fewer total job openings possibly negativity effecting total hires in February. The current unemployment rates from the past twelve months are also some of the lowest within the past two decades. The February JOLTs report showed more slightly negative signs in the healthy growth we had seen in previous months, as is shown in the decline of total job openings and hires, but overall, there was very little change from January. 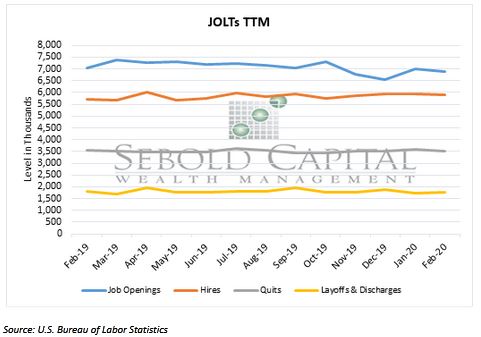