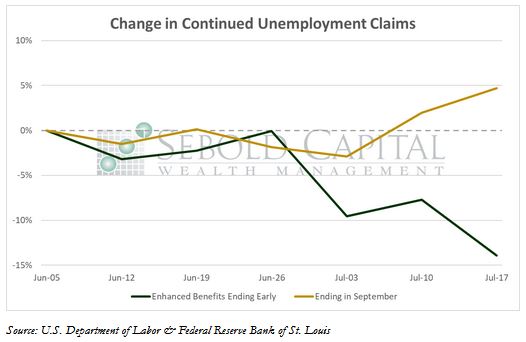 Last week, initial claims declined by 3.5% to 385,000, remaining below 400,000 for the second consecutive week. Meanwhile, continued claims fell by 11.1% to a new pandemic-low of 2.93 million. The number of initial claims remains above its long-term average of 372,000, while the number of continued claims is now approaching its long-term average of 2.81 million.

Initial claims declined last week after a brief uptick earlier in the month, a sign that layoffs continue to ease as the economy recovers. Continued claims saw their largest single-week drop since October, suggesting that more people are going back to work. Continued claims have declined at much faster rate in states that have opted out of the enhanced unemployment benefits, falling roughly 13.9% since early June, when states started to phase the program out. By contrast, continued claims have increased 4.7% in states that plan to keep the additional payments in place until the program expires at nationwide level in September.

This is simply the latest piece of evidence that points to enhanced unemployment benefits as the main cause of the sluggish labor market recovery. The $300 weekly payment, on top of state benefits, has made it more profitable for many would-be workers to be unemployed. As the data has shown, once these benefits expire at a nationwide level, more individuals will likely begin seeking employment and labor market conditions should continue to normalize.