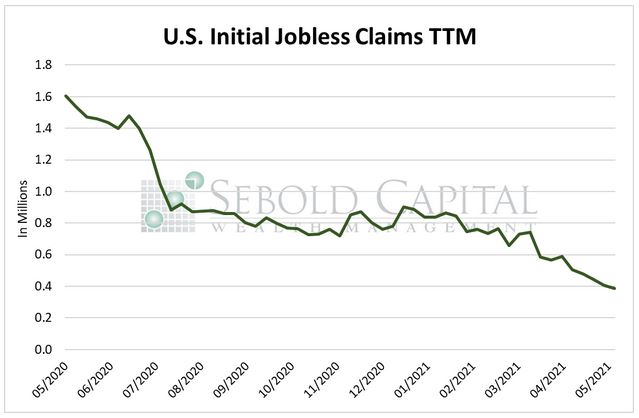 Last week, initial claims reached yet another pandemic low, falling below 400,000 for the first time since March of 2020. The number of claims decreased by 4.9% to 385,000, marking the fifth consecutive week in which the figure has fallen. However, the number of continued claims rose to its highest level since mid-March, increasing by 4.7% to 3.77 million. The number of initial claims is now quickly approaching its long-run average of 372,000, while the number of continued claims remains considerably above its long-run average of 2.81 million.

The number of initial claims continued to decline last week, indicating that labor market conditions keep improving now that very few restrictions on businesses remain in place. Less people are being laid-off now, either permanently or temporarily, than at any other point since the start of the pandemic. However, the number of continued claims—individuals who have filed for unemployment insurance benefits for more than two consecutive weeks—increased once again, suggesting that people are still not going back to work even if they have the opportunity to do so.

The day before these figures were released, the Federal Reserve published the latest version of the Beige Book, which is a gathering of anecdotal information on current economic conditions. One of the main themes throughout the report was how difficult it currently is for businesses to attract and retain workers, with many respondents blaming this on the expanded unemployment benefits. These additional benefits make it more profitable for many workers to be unemployed than to be working, which has led to a nationwide labor shortage. Some states have begun taking measures to combat this shortage by opting out of the additional benefits, however, it will likely take a few weeks for the impact of these measures to be seen in the labor market statistics. The number of initial claims will likely continue to decline in the next few weeks as businesses try to hold on to their workers, but unemployment will remain elevated until the additional unemployment benefits expire at a nationwide level in September of this year. 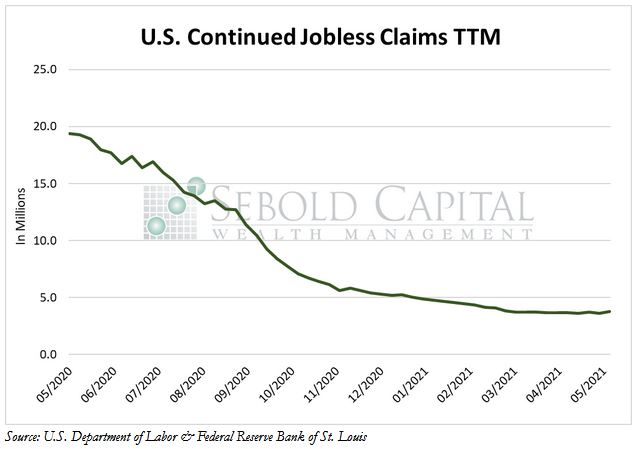