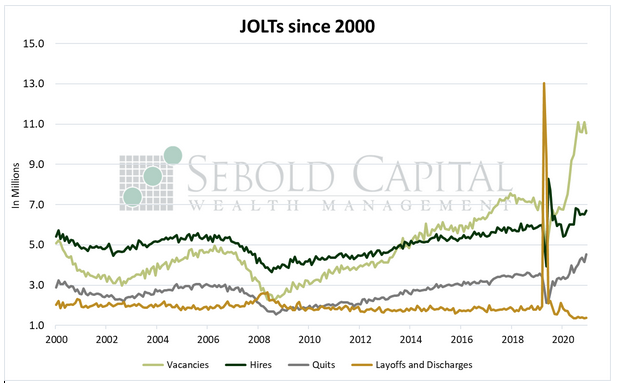 In November, vacancies declined by 4.8% to 10.6 million, while the number of hires rose by 2.9% to 6.7 million. Total separations increased by 6.5%, with the number of people voluntarily leaving their jobs rising by 8.9%—the most since last March—to an all-time high of 4.5 million. Layoffs and discharges rose by 1.4% to 1.4 million, also contributing to the increase in separations. The changes in hires and total separations yielded a net gain in employment of 424,000 workers for the month.

The number of workers quitting their jobs saw a large increase in November while job openings remained close to record levels, signaling that the labor market continued to tighten towards the end of last year. The ratio that measures labor market tightness rose to another all time high, hitting a value of 1.54. This means that there are roughly 154 jobs available for every 100 people who are considered to be unemployed. The large number of workers leaving their jobs implies that they largely are confident about the state of the economy—a worker would likely not leave his job unless he though the chances of finding a new one were high—and many may be looking to take advantage of the historically high level of vacancies. A significant portion of the labor turnover appears to be coming from lower wage segments, such as retail and food service, as workers likely seek better conditions and higher pay. While it is commendable that workers are looking to improve their situation by pursuing opportunities that offer higher pay, it is important to remember that unless workers have become significantly more productive, pressure on wages can very quickly turn into pressure on prices—which is about the last thing we need at the moment.

On the other hand, the gap between vacancies and hires—which had previously reached an all-time high in October—declined to its lowest level since June. While the gap remains well above historical trends at 3.9 million, it could be a sign that the persistent labor shortage is starting to ease. Most of the disincentives to work, courtesy of the Federal Government, are now gone. The enhanced unemployment benefits expired months ago, and the expanded Child Tax Credit payments were set to stop at the end of 2021. Congress’ failure to pass the “Build Back Better” bill staved off a wave of new and expanded entitlements planned for 2022. As a result, many of the people who were previously unemployed may find themselves with a renewed incentive to find gainful employment and the imbalance between the supply of and demand for labor may finally begin to ease. 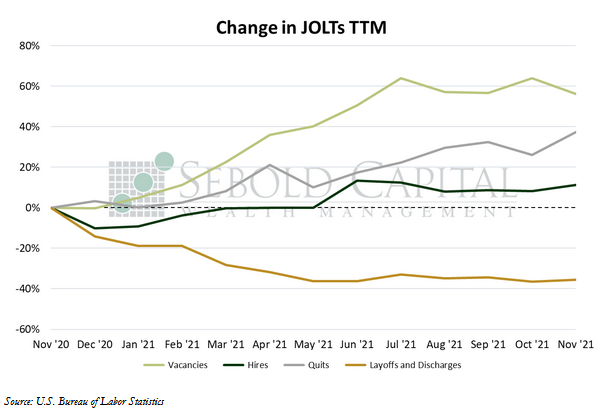