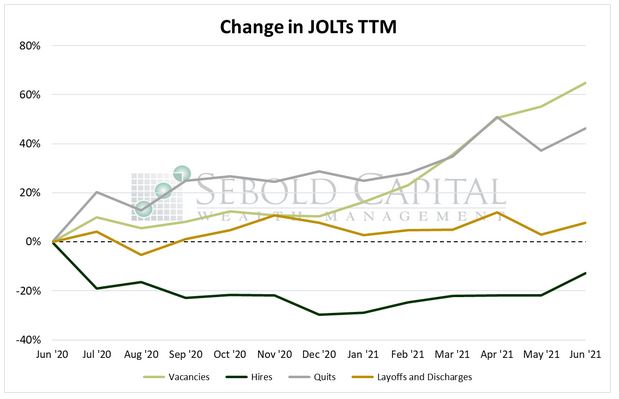 The number of job openings in the U.S. rose to a record high for the fourth consecutive month, blowing past market estimates of roughly 9.0 million. However, the number of people getting hired for these positions continued to lag considerably behind labor demand, although it showed some improvement. For the first time since the start of the pandemic, the number of available positions outnumber the people who are counted as unemployed. The labor market tightness ratio, which measures the former, rose to 1.06 in June, meaning that there are roughly 106 jobs available for every 100 unemployed individuals. Furthermore, layoffs declined to another record low and the number of people leaving their jobs voluntarily increased. The latter is seen as a measure of workers’ confidence in labor market conditions, as they likely would not quit their jobs unless they expected to find another one with relative ease.

The widening gap between vacancies and hiring continues to show that firms are struggling to find workers as they rush to meet rising consumer demand. The labor shortage has been most severe in industries such as retail, food services, transportation, and warehousing. Not coincidentally, these industries tend to have lower starting wages, meaning that potential workers could be more easily discouraged by, say, a $300 weekly payment from the government with little to no strings attached. The enhanced unemployment benefits have undoubtedly played a key role in the current labor shortage; even some proponents of this program have been forced to admit as much as more evidence has come out to support this theory. More timely jobs data has shown favorable labor market trends in states that have phased out these additional benefits, while states that continue this program have not fared as well. The next few JOLTs reports will likely show increased hiring as the effects of half the country ending the enhanced benefits become clearer, although the full impact will not be observable until after September, when the program is supposed to expire at a nationwide level. 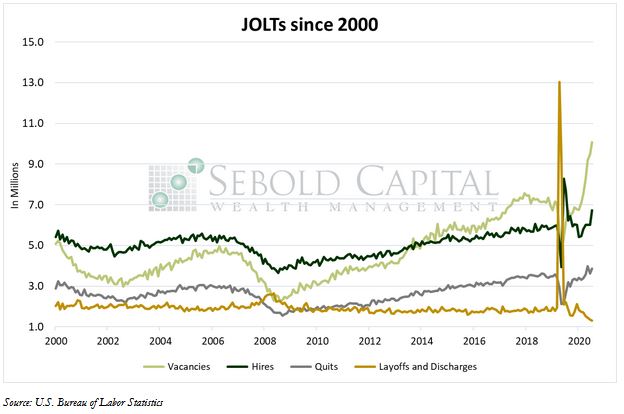