M2 Money Stock refers to the measure of money supply that includes financial assets held mainly by households such as savings deposits, time deposits, and balances in retail money market mutual funds, in addition to more readily-available liquid financial assets as defined by the M1 measure of money, such as currency, traveler’s checks, demand deposits, and other checkable deposits. The US M2 Money Stock is critical in understanding and forecasting money supply, inflation, and interest rates in the US.

Over the last three weeks of March, the M2 money supply has blown up by $532 billion. This is primarily a result of Federal Reserve cutting the federal funds rates back down to zero and altering the federal reserve discount rate, thus intervening in major economic ways. The current discount rate is now 0.25%, still lower than its 0.50% rate during the 2008 financial crisis. By lowering this rate, banks are far more likely to borrow directly from the Fed, which increases money supply faster than just simply borrowing from another bank, because the Fed creates money while banks only loan a fraction of what already exists. This causes new money to enter the system directly. It can be predicted that the M2 money supply will continue to increase as direct stimulus checks to consumers as part of the $2 trillion stimulus bill have not been handed out, and as congress continues to discuss more economic actions. 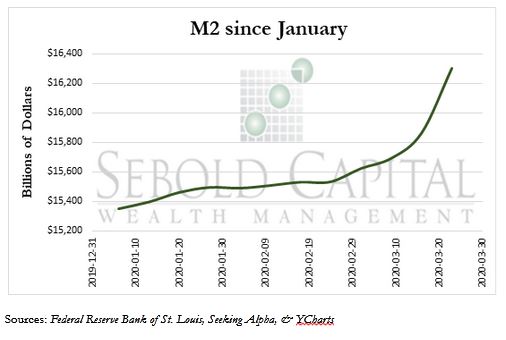