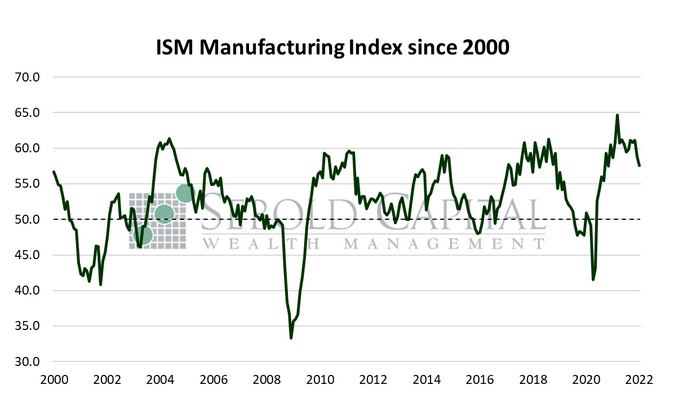 The Manufacturing PMI (formerly the ISM Manufacturing Index) is derived from a survey of purchasing managers and their outlook on overall conditions by looking at factors such as orders for durable goods, industrial production, and hiring. It gives a general direction rather than the specific strength of the factory sector and manufacturing activity in the U.S. A reading above 50 is an indicator that the manufacturing sector is growing while a reading below 50 indicates a contraction.

In January, the Manufacturing PMI declined by 1.2 percentage points to a level of 57.6—the lowest since November 2020. The reading came in below market expectations, which hovered around 58.0. Despite the decline in the index, this marks the twentieth consecutive month of growth for the manufacturing industry and for the economy as a whole since the index remains above 50 points. All six major manufacturing industries registered moderate to strong growth last month, and of the eighteen industries that make up the report, 14 reported growth, 3 reported no change, and only one reported a decline in activity—paper products.

The Manufacturing Index is comprised of several equally weighted subindexes that measure conditions in the industry. The sector remains in demand-driven, supply-constrained environment—however, January was the third consecutive month that showed improvements in supplier delivery performance and labor availability. That said, the manufacturing industry is still facing shortages of critical materials, issues with transporting products, and constant worker absenteeism. Demand continued to expand, with new orders increasing (although at a somewhat slower pace) and inventories remaining at very low levels. Consumption likewise increased, although at a slower rate. Inputs continued to constrain production, with the relevant subindex declining by 1.6 points. The prices paid index increased by 7.9 points in January (about 11.5%) to 76.1, reversing its slight decline in December. Prices paid by the manufacturing industry have been increasing for the past twenty consecutive months and show no sign of slowing down. These higher input costs will continue to be passed on to consumers for the foreseeable future—at least while monetary policy remains highly accommodative. 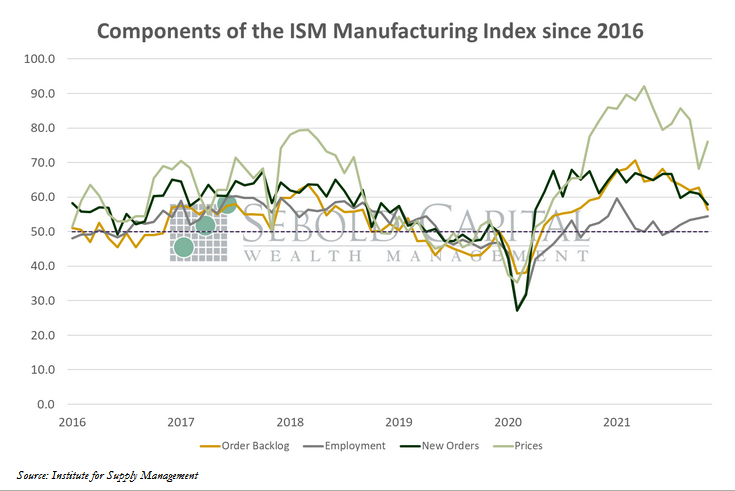