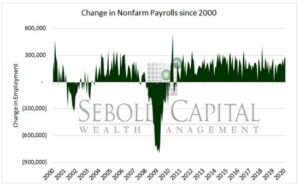 The unemployment rate is at 3.5%, which is slightly lower than last month’s 3.6%; it should be noted, however, that the unemployment rate is obtained from survey data, which could be influenced by sentiment. Nonfarm payroll rate of change has remained the same from January to February, increasing again by 273,000. Jobs also increased notably in the service-providing sector, with areas such as leisure & hospitality (+51,000), education and health (+54,000), and business services (+41,000) growing the most. However, sections such as retail trade (-7,000), transportation and warehousing (-4,000), and wholesale trade (-2,600) fell. It should also be noted that revisions will likely be made– 90% of the time, nonfarm payrolls have a margin of error of ±110,000 jobs, and the unemployment rate has a margin of error of ±0.2%.

In total, the nonfarm payroll employment rose by 273,00 to 152.5 million, much higher than the estimated 175,000. Average hourly earnings also increased slightly by 0.3% in February and are up 3% from a year prior; this, combined with the steady increase in median usual weekly earnings, shows that earnings are increasing on the whole, which bodes well for sustainable consumer spending and thus economic growth. It is currently too early to predict the impact that the Coronavirus will have on the labor market. However, many economic researchers fear this may be the last positive employment report for some time, but it shows that before the virus spread that the labor market was at a good place before the pandemic. 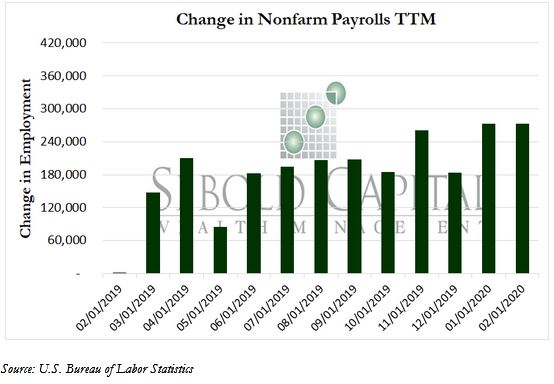