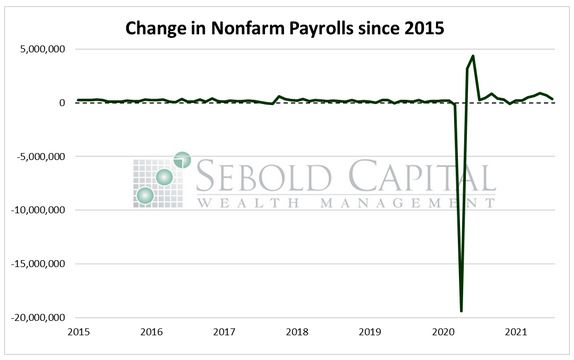 The number of payrolls in the private sector rose for the seventh consecutive month as the labor market continues its increasingly sluggish recovery. Last month’s gain in private employment was the smallest since February, and it was less than half the expected increase. The private sector is still missing roughly 6.3 million jobs from the pre-pandemic high, which exceeded 129 million. However, this is not due to a lack of demand, as vacancies are plentiful and firms have been rushing to hire workers. The main factor holding back the labor market has largely been a lack of supply; relatively few people are willing to fill the open positions, even as the unemployment level remains elevated. While there are admittedly several factors causing the labor shortage, the main culprit has been the enhanced unemployment benefits courtesy of the federal government. The weekly payments, which have ranged from $600 to $300 throughout the pandemic on top of state benefits, have made it more profitable for many would-be workers to be unemployed.

In order to combat the labor shortage, about half the states have opted out of the program prior to its nationwide expiration date in September. While this month’s ADP report seems counterintuitive given that hiring decreased, the data is unfortunately not broken down on a regional basis, so the impact of ending the additional payments is not entirely clear. However, there has been some data that shows unemployment rates have been decreasing faster in states that have ended the enhanced benefits. Some might be inclined to point to the Delta variant as the reason behind sluggish hiring. However, most of last month’s job gains were in the services sector, particularly leisure and hospitality, which would likely be more sensitive to pandemic-related concerns. This suggests that workers are perhaps not as concerned about this new variant as some might believe. Overall, July’s ADP report adds to the existing concerns about slowing economic growth and rising inflation—a scenario that could quickly turn into stagflation. 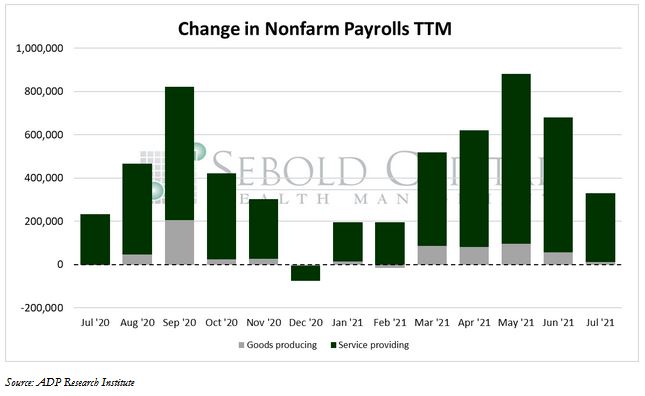