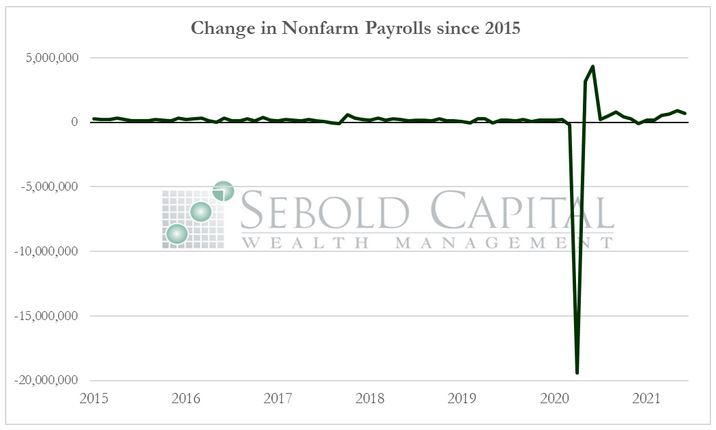 The number of payrolls in the private sector rose for the sixth consecutive month as the labor market seemingly continues to recover. Private sector employment exceeded 129 million before the pandemic, so the labor market still has a long way to until it has made a full recovery. Unlike in previous recessions, the labor market has not been held back by a lack of demand for labor, but rather by a lack of supply. In March of 2020, the federal government enacted a number of measures intended to lessen the economic of the pandemic. One of those measures was expanding the scope of unemployment insurance benefits and providing an additional $600 per week to claimants. While the amount was subsequently reduced to $400, and then to the current $300 per week, it still has undoubtedly impacted the rate at which people go back to work.

As the economy has gradually reopened, demand for labor has surged. The number of job openings keep hitting record-highs as businesses rush to meet the rising consumer demand. This has been particularly true for the services sector, and especially for the leisure and hospitality industry, which was arguably impacted the most by the lockdowns. As soon as it was able to reopen, the leisure and hospitality industry has been leading in the efforts to hire workers, adding 332,000 jobs in June alone—nearly half of the net change in employment for the month. Other industries that reported large increases in hiring were education and health, transportation and utilities, and business services. Information technology was once again the only industry to report a net loss of jobs, continuing a trend that has been ongoing for the past eight months.

While hiring continues to pick up, a noticeable and unprecedented gap between the supply and demand for labor remains. In order to combat the ongoing labor shortage, several states have started to opt out of the enhanced unemployment benefits in the past few months. Unsurprisingly, the Wall Street Journal recently found that unemployment is declining faster in states that are no longer providing the additional benefits than in states that still are. Unfortunately, the ADP Employment Report does not break down the data by state, but it is likely that hiring increased the most in places that have ended the enhanced benefits. Employment data that will be released in the coming weeks (that does provide a more detailed geographical breakdown) will likely highlight how employment is being impacted by these additional benefits. 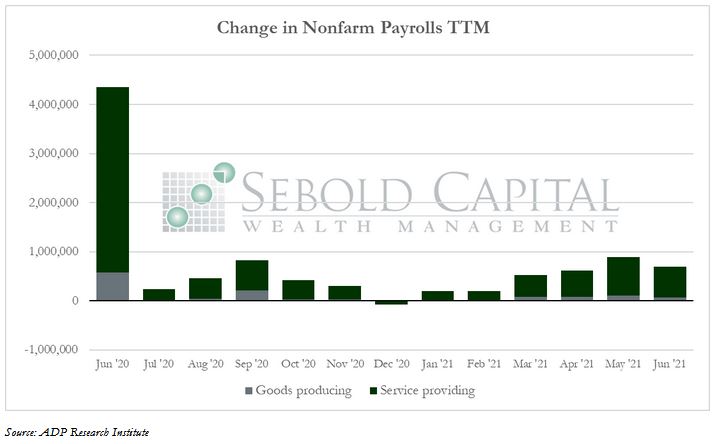