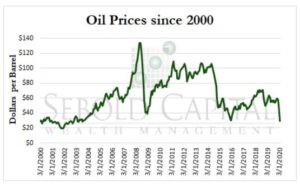 The cost of oil is important because of the large amount that is used in American industries and purchased by consumers every day. The price-per-barrel of the West Texas Intermediate oil firm can be used to predict future costs of business; industries heavily reliant on oil and gas consumption like construction and transportation would be more economically affected than industries such as technology.

The total rig count has decreased since the beginning of 2020 by 53 rigs from a total of 677 to 624 in March. The overall trend shows that the number of rigs has been declining since December of 2019 and has since fallen by an average of 2-3 rigs per reporting period. Oil prices have also been steadily decreasing by an average of $1.28 at a rate of –1% per month before the drop in March. In March, oil prices per barrel fell by 42% from $50.54 to $29.21 a barrel. Overall, the total number of rigs and price per barrel has declined by 24% and 50% over the past year.

If oil rigs are being removed in the United States, we would typically expect to see oil prices increase over time, due to basic supply and demand principles. Theoretically, as the total oil rig count decreases, there will be less oil produced, and as a result of less oil on the market with continued demand, the price would normally continue to increase until it reaches an equilibrium. However, we are experiencing many national and global factors that have come to counteract the reduction of total rigs. Demand has decreased in March, due to the coronavirus pandemic. Oil consumption has largely declined as many governmental restrictions now limit personal travel, and social distancing measures have been put into place. Another major factor in the decline of oil prices is the Oil Price War between Russia and Saudi Arabia. As a result of this price war, Saudi Arabia and Russia have both increased their oil production, thus causing sharp decreases in prices as supply increases. It is uncertain how these numbers will change as both the major factors of the oil price decline are dependent on government action and international affairs. 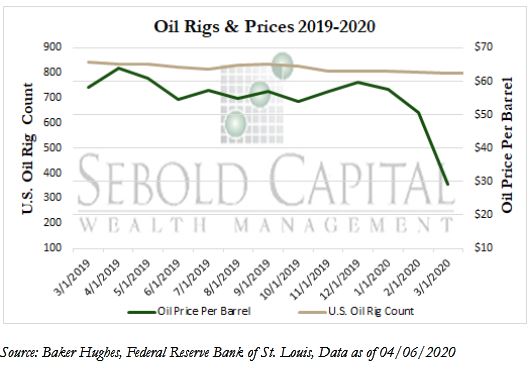