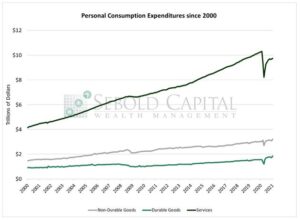 Consumer spending, measured by Personal Consumption Expenditures (PCE), makes up approximately two-thirds of the economy and is a direct measure of purchasing activity. PCE is a reliable indication of inflation because it is calculated from data acquired directly from the GDP report and businesses. We see where consumers are spending their dollars, whether it be durable and non-durable goods, or on services. Changes in the personal income level dictate consumer spending.

Both personal spending and income surged last month in correlation with the latest round of fiscal stimulus from the Federal Government. A similar increase in income and consumption was observed when the first round of stimulus checks was sent out las April. The personal savings rate also increased last month, rising from 13.4% to 20.5%. The abnormally high influx of cash into the economy over the past year has led to concerns of inflationary pressure on prices, but—at least according to most common measures of inflation—it has yet to materialize. The index measuring personal consumption expenditures, chained to 2012 dollars, has prices increasing at an annual rate of 1.5%. However, recent spikes in asset, commodity, and real estate prices may suggest that inflation is actually higher than what is being reported. Likewise, research has found that the pandemic and the resulting lockdowns may have altered consumers’ expenditure baskets, resulting in a less accurate inflation measurement from traditional indices. Nevertheless, inflation is expected to increase over the next few years, particularly once the economy is fully reopened and whatever pent-up consumer demand there is gets released. 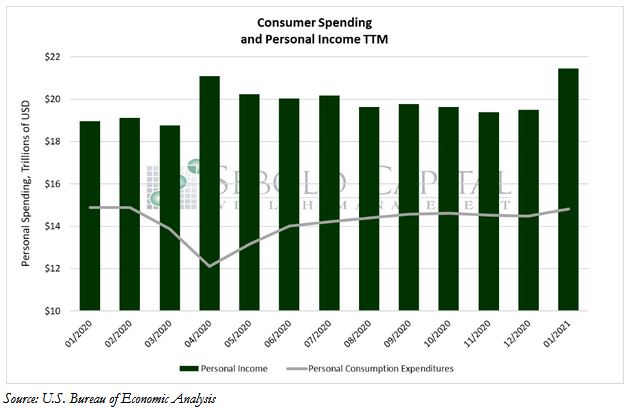