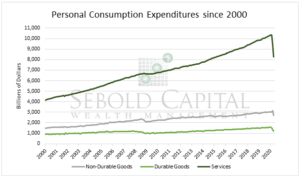 Consumer spending, measured by Personal Consumption Expenditures (PCE), makes up approximately two-thirds of the economy and is a direct measure of purchasing activity. PCE is a reliable indication of inflation because it is calculated from data acquired directly from the GDP report and businesses. We see where consumers are spending their dollars, whether it be durable and nondurable goods, or on services. Changes in the personal income level dictate consumer spending.
Personal Consumption Expenditures (PCE) increased by 8.2% from April to May this year, but Personal income (PI) fell by 4.2% during this same period. Purchases of durable goods, which increased by 28.6%, contributed most to the rise in personal spending in May. Purchases of non-durable goods and services also followed suit, increasing by 7.7% and 5.4%. As predicted in April, the savings rate in May has fallen to 23.2% following the surge in personal spending this month. Overall, PCE levels are still down 9.32% and PI levels remain 7.0% higher than this time last year.
This past month the economy experienced a comeback in personal spending as the “stay at home” order for COVID-19 was officially lifted, and businesses returned to operating at a higher capacity. The pandemic has halted economic growth, but this increase in personal spending is one of the first indicators that the economy is getting back on track.

The Consumer Price Index, which provides information about the cost of living for the average household in the US, only decreased by 0.1% in May. This reflects that prices will soon bottom out and the average cost of living will begin to rise again, assuming another wave of the Covid-19 virus does not interfere with economic activity. With personal spending increasing as a result of the government’s stimulus plan, consumers were more inclined to spend this month, especially noting the massive number of businesses that reopened.

Purchases of durable goods experienced the largest spike in numbers in May, and this is largely attributed to the resumption of automaker production. This month, orders for automakers increased 28% due to enticing sales and competitive prices. Due to the expensive nature of durable goods, the steady demand for these products continues to help stabilize the economy.

While levels of personal spending and income tend to correlate and move in the same direction, personal income fell this month despite the increase in personal spending. This decrease in personal income was primarily due to a decrease in payments to individuals from the federal economy recovery program. The government is continuing to send out stimulus checks, but at lower levels than in April. In the wake of a possible second outbreak of this destructive virus, the government has proposed a second stimulus plan that may be implemented in order to limit the impact of this recession and help restore economic activity to its previous level. As the initial stimulation from the reopening of businesses wears off, it is projected that, pending the decision on this second stimulus plan, personal income and personal spending levels are expected to fall. None of this can be certain due to the unpredictability of the Coronavirus pandemic, but it is evident that the economy is slowly adjusting and recovering from its horrifying start to this year. 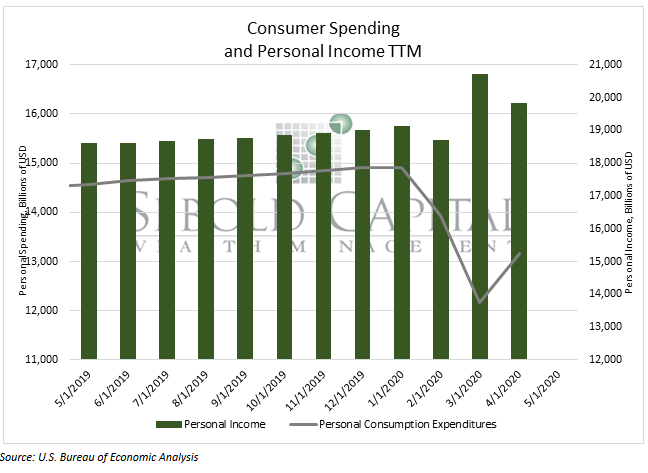