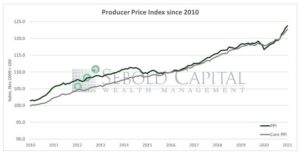 The Producer Price Index (PPI) looks at the average change in selling prices from the viewpoint of domestic producers of both goods and services. Three areas of production are observed: industry-based, commodity-based, and commodity-based final demand-intermediate demand. Investors look to the producer price index, which is a more relevant way of gauging inflation than CPI because of the large basket of producers (100,000 price points) that Bureau of Labor Statistics uses as a data pool for their calculations.

In April, the PPI rose by 0.57% to a level of 123.8, following a 0.98% gain the previous month and topping market estimates of a 0.3% advance. Producer prices have surged by 6.2% in the past twelve months, which is the single largest year-over-year advance in well over a decade. The Core PPI, which excludes food and energy prices, increased by 0.7% to 122.8 last month and has risen by 4.2% in the last year.

Producer prices continued to climb last month, as costs for services and final demand goods led to the largest yearly gain for the index since 2010. Commodity prices, in particular, have soared by 17.3% since last April. The rise in wholesale prices is yet another sign of the inflationary pressure building up in the economy. A combination of excessive fiscal stimulus from the Federal Government, supply chain bottlenecks, and rising consumer demand have created a near-perfect recipe for escalating inflationary pressure. While the Federal Reserve continues to insist that this is transitory, but their refusal to raise interest rates will make controlling inflation increasingly more difficult. 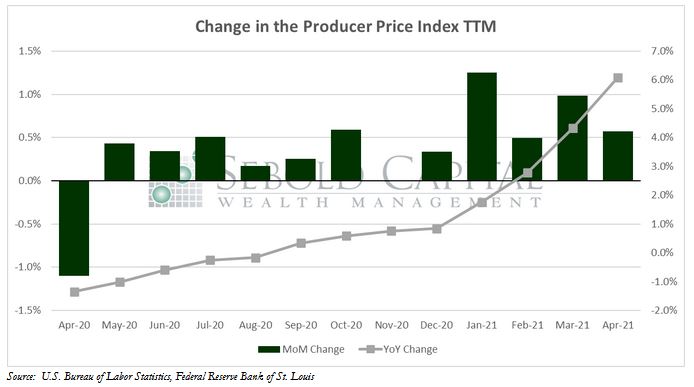