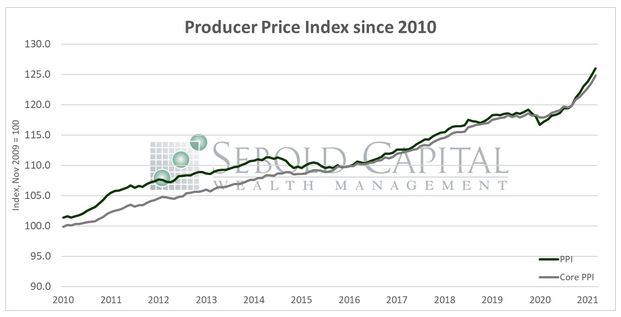 In June, the PPI rose by 1.0% to a level of 126.0, topping market estimates of a 0.6% advance. Core PPI, which excludes prices for food and energy, also advanced 1.0% last month and rose to a level of 124.8. Year-over-year producer inflation surged to 7.3% in June, while core producer prices have soared 5.6%. Annualizing the PPI changes for the past six months would put producer inflation for 2021 at 10.4%, while core inflation would hit 8.4%.

Prices that producers pay for services and final demand goods continued to climb at an alarming rate last month, making the argument that high inflation is merely transitory seem even less convincing. Producer prices posted their largest annual year in more than a decade and came in considerably above market expectations. Most economists were expecting final demand prices to increase by 6.8% and core prices to rise by 4.9%, showing that many continue to underestimate the true extent of the inflationary pressures afflicting the economy.

Commodity prices and labor costs faced the most upward pressure according to June’s report. Commodity prices rose 1.8% last month and have soared by 19.5% over the past year. Some commodity prices even climbed by double digits last month, including plywood, aluminum base scrap, and liquefied petroleum gas. Labor costs have also increased recently, as businesses continue to face difficulties hiring and retaining workers, which is undoubtedly putting upward pressure on wages. Many businesses have started to pass these higher costs onto consumers by raising prices, and more are likely to follow. The Federal Reserve has stated that it will tolerate inflation above its 2% target for the near future, and will take no action to contain it as it is more concerned with reaching full employment. Inflation will likely continue to run hot for the foreseeable future, even as the supposedly transient factors related to the economy reopening start to fade. The money supply has never been higher, interest rates have never been lower, and consumer demand is expected to keep rising—creating a near-perfect inflationary storm. 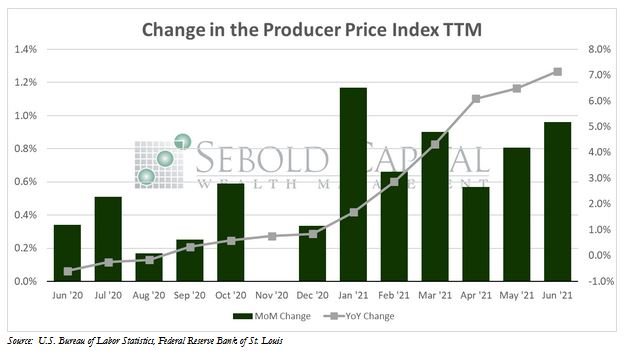