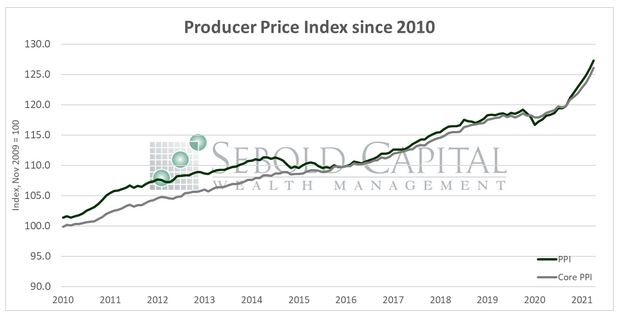 In July, the PPI rose by 1.0% to a level of 127.3, topping market estimates of a 0.7% advance. Core PPI, which excludes prices for food and energy, likewise advanced 1.0% last month and rose to a level of 126.1. Year-on-year producer inflation soared to 7.7% in July, while core producer prices have surged 6.2%. On an annualized basis, the last seven months of the PPI would put producer inflation at 10.7% for 2021, while core inflation is on track to hit 8.4%.

Prices that producers pay for services and final demand goods continued to climb at a shocking rate last month, posting nearly identical results to June’s advance. If the recent CPI release had provided some ammunition to the “it’s transitory” crowd, this report dispels nearly all the supposed evidence that inflation is on the verge of cresting. Nearly three-quarters of the PPI rise was due to a 1.1% advance in the cost of services, the largest increase in the series’ history. Passenger fares and hotel room rates rose sharply amid an increase in travel this summer. Prices for goods were not too far behind, rising 0.6% for the month. Auto prices have had an outsized influence on price indices in the past several months and this was no exception, with wholesale auto prices rising last month, partly due to the semiconductor shortage.

Last month’s PPI release is merely the latest among a long series of inflation red flags that continue to pop up throughout the economy. Pandemic-related supply chain constraints, a surge in consumer demand fueled by a surplus of money, and record-low interest rates have created the perfect inflationary storm. Many continue to claim that the situation is merely transitory, but their arguments seem to weaken every time a new inflation indicator is released. Interest rates remain at 0%, meaning that there is nothing to keep inflationary pressures on check. Even these price pressures turn out to be transitory, the proponents of this theory are likely in for an unpleasant surprise. Their discourse suggests that they are expecting prices to return to pre-pandemic levels, which would be deflation and not transitory inflation. Even the Federal Reserve has been forced to admit that the increase in prices will not reverse. The best scenario looks like disinflation—a decrease in the rate of inflation. However, given the ultra-low interest rate environment, the unclear path towards even tapering the Fed’s asset purchase program, and the current plans for future government spending, consumers and producers alike would be better off not holding their breath for a slowdown in the inflation rate. 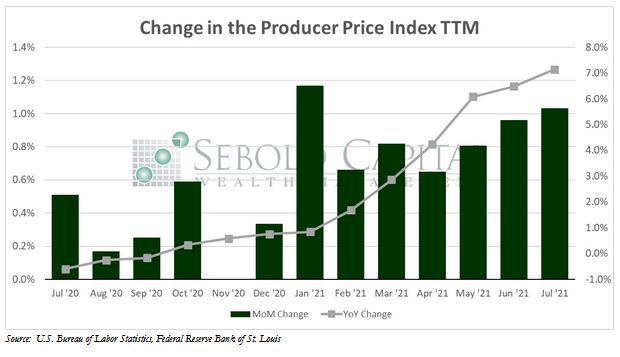