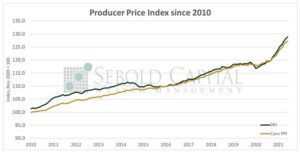 Prices paid by producers for goods continued to climb last month, rising by 1.3%, the most in four months. Prices for goods had a significant influence in September’s report, as would be expected give the pressure exerted by the ongoing supply chain disruptions. There was a large pullback in prices for transportation and warehousing services that provided some relief for core prices, although this category is rather volatile and transportation costs are likely to rise given the current state of energy prices. The latter, which have recently surged, suggest that producer prices will continue to climb for the remainder of the year.

The cost of services rose by 0.2%, the smallest gain in three months. This was mainly due to a 17% drop in airline fare prices, although this is likely to be temporary given how sensitive airlines are to fuel costs. Rental car prices also eased, but there is no indication that they are in a downward trend at the moment.

At last, it looks like the Federal reserve might actually start tapering their asset purchase program later this year. The recently released minutes from the latest FOMC minutes showed that they plan to begin the process in November or December and conclude it around the middle of next year. After months of merely thinking about considering the idea, this may seem like progress. However, the timeline to raise interest rates remains uncertain. Given the extent of the inflationary pressures seen throughout the economy, tapering alone will likely do little to stop prices from continuing to increase at alarming rates. Tapering will not reduce the inflated money supply, it will merely continue to expand it at a slightly slower pace, so inflation will likely continue to test the meaning of the word “transitory” for the foreseeable future. 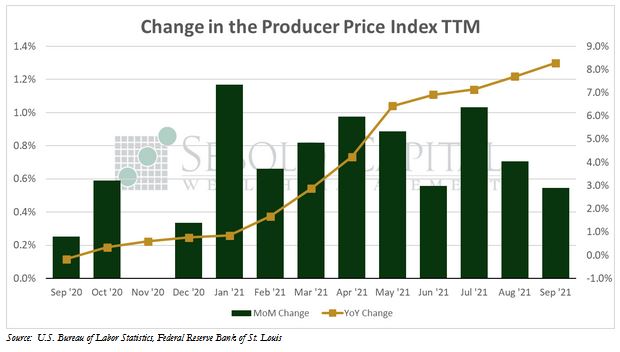