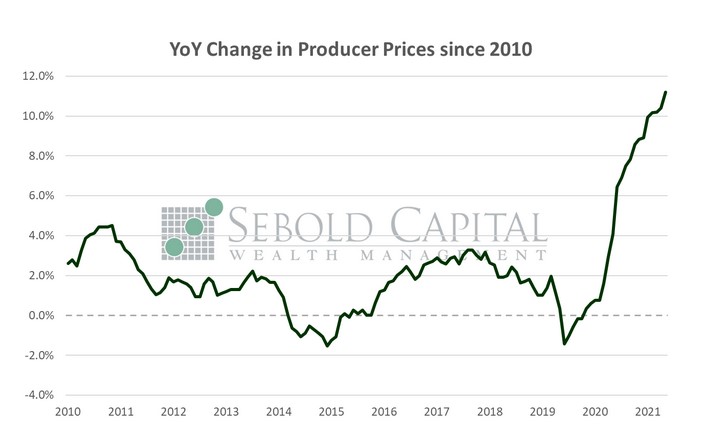 In March, the PPI rose by 1.4% to a level of 136.7, coming in above market expectations of a 1.1% advance. Core PPI, which excludes prices for food and energy and is therefore considered to be less volatile, increased by 1.0% to an index level of 133.2, likewise beating market expectations of a 0.3%, and exceeding them by a wide margin. As if that was not enough, both headline and core numbers for February were upwardly revised. Year-over-year producer price inflation surged to 11.2%, while core inflation rose to 9.2%.

Producer prices rose sharply last month, marking the fourth consecutive month of double-digit producer inflation and signaling that inflation continues to brew in the U.S. economy. Unsurprisingly, supply shocks in the energy and commodities sectors resulting from the conflict in Ukraine were a large contributor to the higher PPI print last month. However, the rise in producer prices—or any other prices, for that matter—cannot be simply explained away by geopolitical tensions in Eastern Europe. Core prices, which deliberately exclude food and energy costs due to their volatility, rose by 1.0% in a single month all on their own.

The rapid rate at which prices are rising casts a dark shadow over consumer prices, which some were hoping would have peaked last month. However, firms more often than not must pass on their higher costs onto consumers. Given the disparity between producer and consumer prices, it is likely that the latter continues to have room to the upside. Even if the rate of inflation has peaked (or peaks anytime soon), a plateau is far more likely than outright disinflation, especially as a few quarter-point interest rate hikes are unlikely to have an immediate impact on prices. 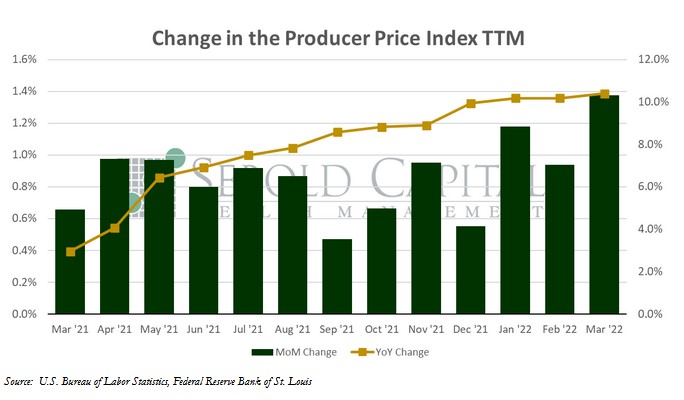