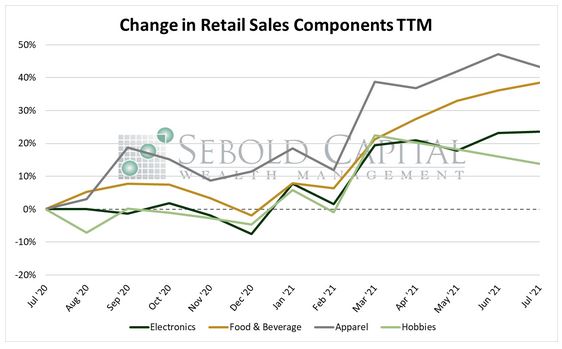 In July, retail sales declined by 1.12% to $617.7 billion. Excluding auto sales, retail sales fell by 0.4%. Two out of the four broad categories that make up the report advanced last month. Sales at bars and restaurants rose by 1.7% to $72.2 billion, while spending at electronics and appliance stores increased by 0.3%to $8.6 billion. Meanwhile, clothing and apparel sales declined by 2.6% to $25.8 billion and sales at sporting goods and bookstores fell by 1.9% to $9.2 billion.

Consumer spending largely retreated last month, a sign that rising prices might be starting to cause a pullback in demand. That certainly seems to be the case for auto sales, which declined by 3.9%. Supply chain constraints have led to reduced production of new vehicles, pushing consumers towards used cars and causing prices to surge. Limited inventories of both used and new cars have made car shopping extremely burdensome even for those willing to pay a premium, resulting in lower sales across the board. Stripping auto sales from the headline retail sales figure yields nearly no change for the month, highlighting the impact of the former on consumer spending.

Some have pointed to the Delta variant as the main factor behind the decline in retail sales. However, strong spending at bars and restaurants suggests otherwise. If consumers were truly worried about the virus, that would likely be some of the first places they would avoid. It is more likely that consumers simply continue to shift their spending away from goods and toward services, such as travel, entertainment, and recreation, which are not fully captured by retail sales. However, inflation could quickly derail consumer spending on both goods and services, so more disappointing retail sales reports are likely to come.