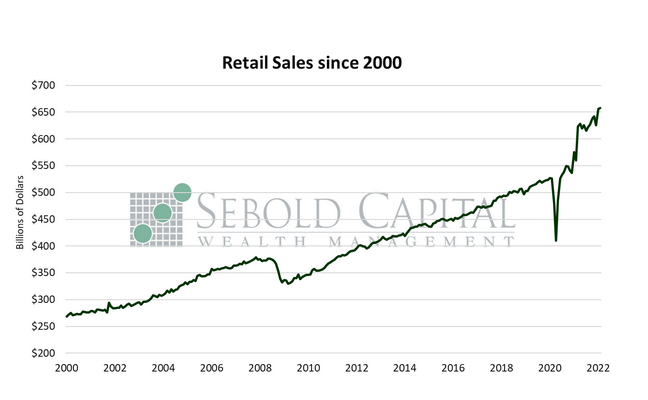 In February, retail sales rose by 0.31% to $658.1 billion, coming in slightly below market expectations and paling in comparison to January’s (upwardly revised by more than a full percentage point) 4.90% advance. Three out of the four broad categories that make up the report increased last month. Sales at bars and restaurants rose by 2.5% to $73.9 billion, spending at sporting goods and hobby stores increased by 1.7% to $9.0 billion, and clothing and apparel sales advanced 1.1% to $26.5 billion. However, sales at electronics and appliance stores declined by 0.6% to $7.3 billion.

Consumers kept up retail spending last month, albeit at a somewhat more moderate pace, as prices continued to rise. It is important to remember that retail sales numbers are not adjusted for inflation, meaning that they fail to reflect whether consumers actually purchased more or if they simply paid higher prices for the same goods and services. Sure enough, consumer prices increased by 0.8% in February, yielding a 0.49% decline in retail sales in real terms—people consumed less but were forced to pay higher prices. That was perhaps most evident at the pump; sales at gas stations rose 5.3% for the month, but the price of gasoline soared 6.7% over the same period. Again, a decline in real terms, but not one that is reflected in the retail sales report. What does show up as a decline, however, is retail sales excluding gas and autos—further highlighting the impact of higher fuel prices on the report.

Stripping out just auto sales—another category that has seen rampant price increases over the past year—retail sales were up just 0.2% from the previous month. Needless to say, that number was also negative after adjusting it for inflation. Most notably, and somewhat unexpectedly, online sales made the largest dent in the report, with non-store sales declining 3.7% for the month. Nevertheless, retail sales remain historically high, posting a year-over-over increase of 17.6%. Consumers also remain in a relatively strong financial position, although it likely will not be too long before inflation erodes whatever pandemic savings may remain and takes a more significant toll on consumers’ purchasing power. Higher interest rates are also in the horizon, with the first hike coming the same day this report was released. While a few quarter-point hikes may not seem like much, they will inevitably translate into higher borrowing costs for consumers, which may also take a toll on spending. 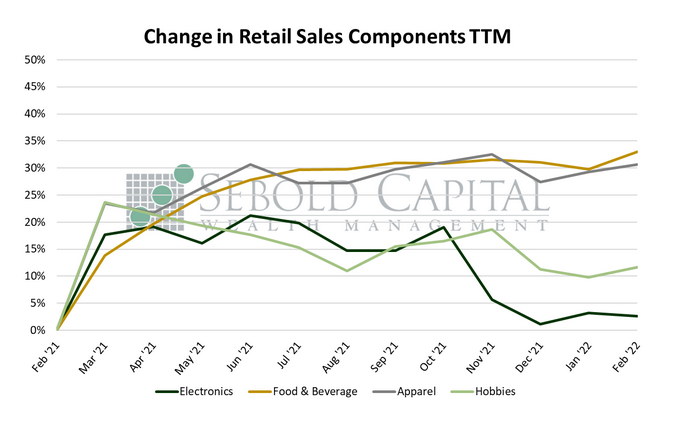