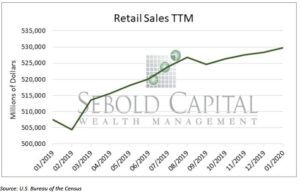 Retail Sales are the total amount of merchandise and related services sold to consumers.  It is considered a sign of strength of U.S. Consumer spending, which accounts for roughly two-thirds of the economy. This indicator also provides insight into which areas of the retail space are experiencing strong sales, such as auto sales. Food was excluded in the above charts because of its volatility relative to other retail categories.

Retail sales excluding food increased by 0.3% in January of 2020, which is a 4.4% increase from last year’s total. The previous percentages would be the same if food were to also be included. Over the past twelve months, gasoline and food services & drinking places have had some of the largest yearly percentage increases of 10.4% and 7.3%.

The increase in January of 2020 is following the same upward trend that began in October of 2019. Gas prices have also risen in the second half of 2019 because gas is formulated differently in the winter and thus becomes more expensive, so gas station sales over the past couple of months have gone up. Non-store retailers have stayed the same over the past month with only an increase of 0.003% but has had a notable 8.4% YOY increase due to continued expansion in e-commerce. Department stores, however, have fallen by -6%. Over the past two decades, e-commerce has grown by a stunning 380%, while department stores have fallen -43%. Clothing and electronics decreased the most this month by -3.1% and -0.5% respectively, perhaps due to competition with their expanding e-commerce counterparts, and higher increases in those CPI components. Retail sales are slowing but are projected to maintain steady; considering steady employment numbers, we do not foresee an imminent drop in seasonally adjusted retail sales. 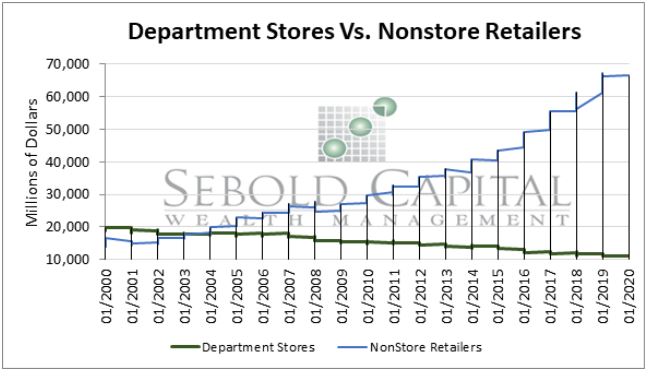