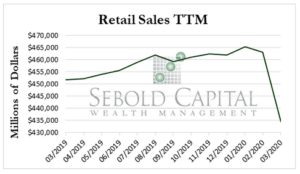 Retail Sales are the total amount of merchandise and related services sold to consumers. It is considered a sign of strength of U.S. Consumer spending, which accounts for roughly two-thirds of the economy. This indicator also provides insight into which areas of the retail space are experiencing strong sales. Food was excluded in the Retail Sales TTM chart above because of its volatility relative to other retail categories.

Retail sales excluding food fell by -6.19% in March, which is still a -3.8% decrease from last year’s total. The previous percentages would be -8.73% if food were to also be included, which would be a 6.17% decrease from its total in 2019. Over the past month, nearly all components of retail sales fell, except for food & beverage, health & personal care, building material & garden equipment, non-store retailers, and general merchandise stores.

Non-store retailers had a significant increase of 3.11% this month and another notable YOY increase of 10% due to continued expansion in e-commerce in our daily lives. The growth of non-store retailers this month was fueled by the coronavirus outbreak, as wary individuals have preferred to purchase goods online. It appears that the time consumers have had in front of a computer has increased their propensity to consume online. Department stores, however, have fallen by -20% in March alone. The government closures of “non-essential” business have all but decimated e instore retail sector.  This sharp decline in retail sales is expected to continue into April and will likely continue until the economy is opened up again. 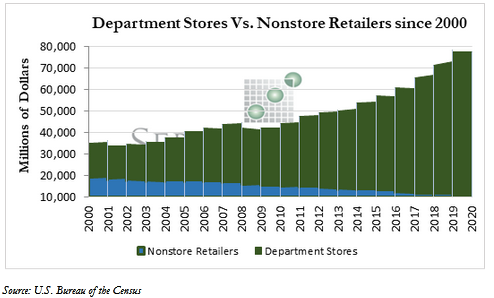