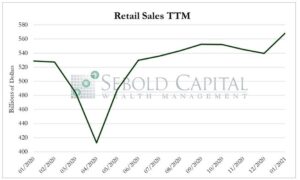 After declining for three consecutive months, retail sales grew by 5.3% in January to a total of $568.2 billion. All of the components that make up retail sales increased last month. Electronics sales surged by 14.7% to $7.8 billion. Sporting goods, books, and music sales increased by 8% to $8.2 billion. Sales at restaurants and bars grew by 6.9% to $54.6 billion, although they remain more than 16% below last January’s level. Clothing and accessory sales grew by 5% to $20 billion. Despite the pandemic and the economic slowdown, retail sales overall have grown by 7.4% over the last twelve months.

Retail sales recovered last month as many cities and states lifted a number of restrictions that had been placed on businesses. Department store sales surged by 23.5% to $10.7 billion, their highest level since the start of the pandemic. Non-store sales had their best month on record, growing by 11% to $87.9 billion. This in jump consumer spending can be attributed in large part to $900 billion stimulus package that distributed $600 checks to shoppers. Spending is expected to continue to rise as another round of stimulus checks is likely to be approved and as more people get vaccinated, which should lead to the remaining restrictions being eased. 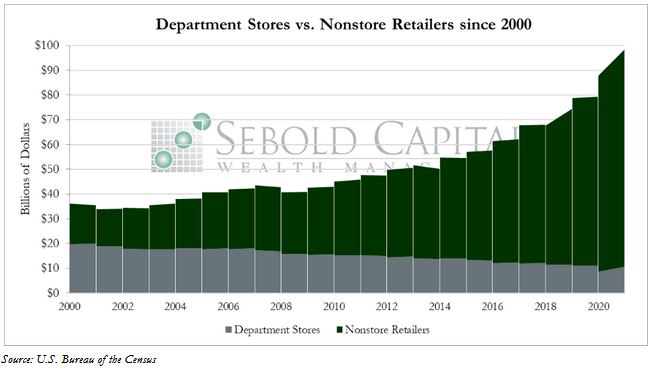