In February, retail sales fell by 3.0% to $561.7 billion from January’s upwardly-revised $579.1 billion. All of the components that make up retail sales declined last month. Sales of sporting goods, books, and music decreased by 7.5% to $7.7 billion. Apparel sales fell by 2.8% to $19.6 billion. Sales at bars and restaurants declined by 2.5% to $54.2 billion; sales of electronics and appliances decreased by 1.9% to $7.8 billion; sales at both physical and online stores declined last month, by 8.4% and 5.4% respectively. Despite the pandemic and economic slowdown, retail sales have grown by 6.3% over the last twelve months.

Retail sales tumbled last month as the impact of the previous round of stimulus checks wore off and consumers pulled back their spending. Severe winter weather in February also contributed to the decline in retail sales, as it likely discouraged consumers from going out to retail stores. The $600 stimulus checks that were distributed in late December led to higher consumer spending in January. Now that a third round of stimulus checks is in the process of being distributed—this time for $1,400—there will likely be another retail sales spike in the upcoming weeks. This will cause a temporary high, but will have little long-term economic impact. Pandemic-related restrictions continue to be eased, which will create a better environment for economic growth. 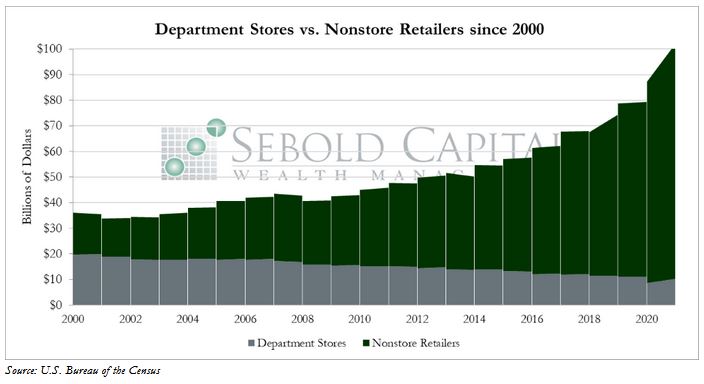