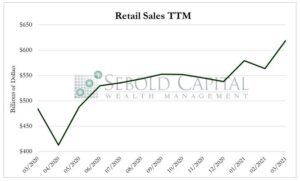 In March, retail sales surged by 9.8% to $619.1 billion after a third round of stimulus checks hit consumers’ bank accounts. All of the components that make up retail sales increased last month. Sales in sporting goods, book, and music stores soared by 23.5% to $9.6 billion. Clothing and accessory sales increased by 18.3% to $22.9 billion. Sales in bars and restaurants surged by 13.4% to $62.2 billion. Electronics and appliance sales grew by 10.5% to $8.5 billion. Despite the economic slowdown resulting from the lockdowns, retail sales have increased by 27.7% over the past twelve months.

Fueled by yet another round of stimulus checks, retail sales soared to an all-time high and had their largest single-month increase since last May, when the economy first started reopening. Many consumers were given $1,400 by the federal government as a result of the $1.9 trillion stimulus package that was passed earlier last month. Just like with the two previous packages, consumer demand spiked with the influx of cash. Sales in non-store retailers grew by 6.0% to $93.1 billion and, most notably, department store sales surged by 13.0% to $10.8 billion. Most of the pandemic-related restrictions imposed on businesses have been eased, allowing them to operate close to full capacity and making it easier for consumers to shop there. While the spike in retail sales that is attributable to the stimulus checks will only be temporary, consumer demand will likely remain stable as the economy continues to recover over the next several months.