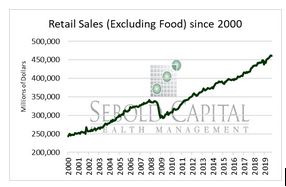 Retail Sales are the total amount of merchandise and related services sold to consumers.  It is considered a sign of strength of U.S. Consumer spending, which accounts for roughly two-thirds of the economy.  This indicator also provides insight into which areas of the retail space are experiencing strong sales, such as auto sales.

This unexpected decrease in retail sales can be attributed to a decline in seven of the thirteen major retail categories; autos, one of the most volatile categories, saw a notable decrease of .9% in September, most likely due to the GM strike and falling used car prices with the rise of rideshare services like Uber and Lyft. In addition, building materials, garden equipment and supplies dealers’ sales fell by 1%, and gas stations sales fell by .7%, most likely due to the approaching winter and low gas prices, respectively. Gas prices will likely rise soon, though, since gas is formulated differently in the winter and thus becomes more expensive. The decrease is likely a temporary fluctuation; since long-term retail growth is evident, the economy continues to grow. Retail sales are an important economic indicator because 70% of consumer spending makes up GDP. Food was excluded in the above charts because of its volatility relative to other retail categories. 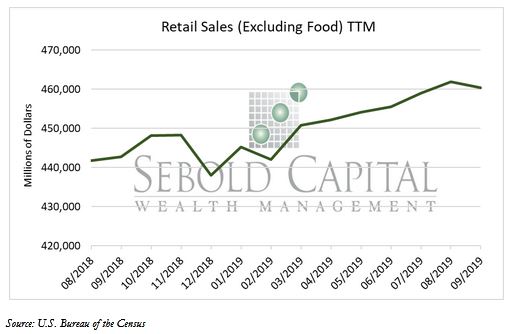