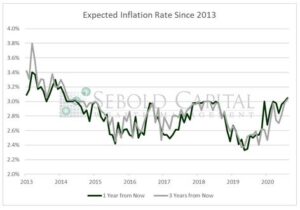 The Survey of Consumer Expectations (SCE) is a monthly survey conducted by the New York Fed that focuses on Americans’ economic expectations and experiences. The survey covers American consumers’ views of how they believe inflation, spending, credit access, and the housing and labor markets will evolve over time—insight that plays an important role in informing policy decisions. The survey follows the same respondents throughout the year, allowing economists and researchers to consistently and effectively examine how expectations are formed and revised over time.

Consumers continue to have mixed expectations regarding the outlook for the labor market. The mean probability of losing a job deceased from 15.0% to 13.6%, the lowest it has been since the start of the pandemic. Likewise, the expected probability of finding a new job in the next three months increased from 46.2% to 49.5%. However, the probability of voluntarily leaving a job decreased from 17.1% to 16%, hitting its lowest point since 2013. Individuals leaving their jobs voluntarily is generally considered to be a positive sign for consumer confidence, as consumers are more likely to hold on to their jobs when the economic outlook is bleak. The expected probability if the unemployment rate being higher in one year increased from 38.9% to 40.2%.

Expectations about personal finances have improved slightly, with more consumers expecting to be somewhat better off over the year ahead than last month. Earnings and income are expected to see modest growth, only increasing by about 2%. However, household spending is expected to increase by 4.22% over the next year compared to 3.42% from last month’s survey. Consumers expect that credit will become somewhat easier to access in the upcoming year, while debt delinquency expectations have risen slightly but remain relatively low. Home prices are expected to keep rising, with consumers predicting a 4% increase in prices, up from 3.62% the previous month. The number of people expected to move remains largely unchanged and currently sits at 14.93%. Consumers see a slightly higher probability that stock prices will be higher a year from now than they did in December’s survey. Government debt is expected to grow by 14.6% in 2021, up from 10.7% the previous month. Under the new administration, taxes are expected to increase by 4.4%. Prior to November, expectations had remained right at or below 3% since July 2016.