Roth IRAs have always been valuable tools in the retirement and legacy world. Then late in 2019, the SECURE Act made tax-deferred inherited accounts, like regular IRA’s or 401k’s a 10-year ticking tax bomb for heirs. Shortly after, the 2020 CARES act injected trillions of dollars back into the economy, inflating the US’s growing debt. This article will start with the distribution rule differences between Roth and Traditional IRAs. Next, it will illustrate the value of Roth money and discuss the implications of the SECURE and CARES Act. Finally, it will cover a unique opportunity in 2020 for additional Roth contributions.

A huge existing benefit of Roth IRAs is that they are not subject to Required Minimum Distributions compared to Traditional IRAs. The SECURE Act did benefit traditional IRAs by changing the initial RMD age from 70 ½ to 72, but the potential tax penalties are still staggering. RMDs are calculated by an age factor each year starting with 25.6 at age 72 (about 4 percent of the IRA). Below is an illustration of the IRA balance by age that would result in an RMD equal to the top & 24% tax bracket for both MFJ and Single filers. 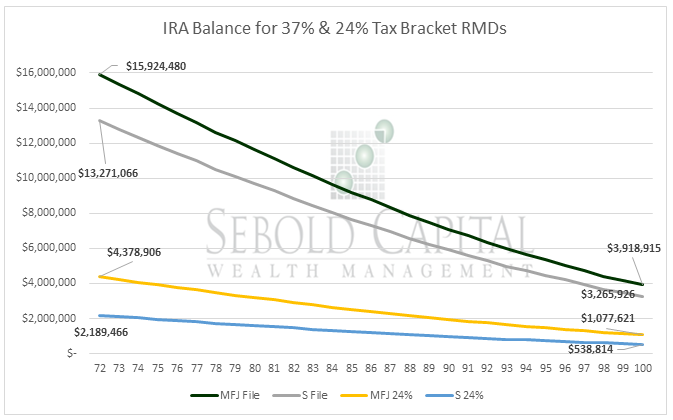 The premise of making a Roth contribution to an IRA or 401(k) is simple: I have a lower effective tax rate now than when this money will come out. On top of that, the investment growth is tax-sheltered, so the longer the money stays in, the more tax efficient it becomes. The optimal last source of retirement funding is Roth money. Better yet, the account may pass to heirs untouched by additional income taxes.

The SECURE Act complicated that matter some, removing the ability to stretch distributions over the lifetime of a non-spouse beneficiary. Now the entire account balance must be distributed within ten years from inheriting the money. The most tax-efficient option for Roth IRAs is the heir will withdrawal the whole balance on the last day possible. There would be no tax implications on the distribution, but it would shelter the investment growth for another ten years. On the other hand, if passing down a traditional IRA, that money will create a taxable distribution at some point. Taxes may be manageable if heirs are in a low tax bracket, but if they are starting their prime earning years, the tax bite could be rather vicious. 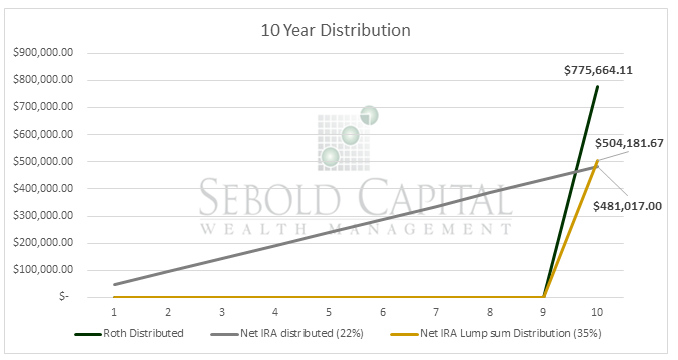 On the other hand, the CARES Act may have less explicitly tipped the scales to Roth contributions. Expecting higher tax rates in the future is more of a speculation play. However, higher tax revenue is the only balance for higher spending. The “unprecedented” stimulus comes with the caveat of potential tax hikes. So, it stands to reason that a taxpayer could be at a higher income level in 2020 but still find themselves in a higher tax bracket down the road. On top of that, RMDs have been suspended for 2020, so individuals with income levels usually set by RMDs have an additional year to make Roth conversions at a lower or equivalent tax rate. This is beneficial for getting extra tax money and lowering future RMDs by shifting more money out of the traditional IRA.

When making Roth contributions, there is a lot to consider, but there is no doubt that it is one of the most efficient saving options. Please reach out to Sebold Capital Management if you want to discuss the Roth options available to you.