US Initial Jobless Claims, provided by the US Department of Labor, provides underlying data on how many new people have filed for unemployment benefits in the previous week. Given this, one can gauge market conditions in the US economy concerning employment; as more new individuals file for unemployment benefits, fewer individuals in the economy have jobs. Historically, initial jobless claims tended to reach peaks towards the end of recessionary periods, such as on March 21, 2009, with a value of 661,000 new filings.

For the ninth consecutive week, the United States economy has observed a decrease in the number of people claiming unemployment. This is a great indicator that the initial shock from the Coronavirus pandemic has and will continue to subside. As the concern wears off, these rates will remain in a steady decline due to the stay at home order being lifted and the reopening of businesses across the country. While people will now have opportunity to seek employment, projections show that the unemployment rate will continue to rise in Q3 and Q4 of 2020 due to the lingering effects of this pandemic. Businesses are expected to reopen, but at less than full capacity, meaning that they will not be hiring as consistently or offering as many opportunities for employment. Many Americans are relying heavily on the $2 trillion stimulus plan that the government injected into the economy. Currently, this plan allows individuals who are out of work to collect $600 a week through unemployment benefits, but this may soon change. The White House is considering reducing those benefits to $250 to $300 a week in the latter half of this year in a second stimulus package that is intended to incentive unemployed Americans to go out and seek work. With now over 43 million Americans claiming unemployment, it is expected that both the unemployment and jobless claims rates will continue to decline but at much slower rates than the past few months. 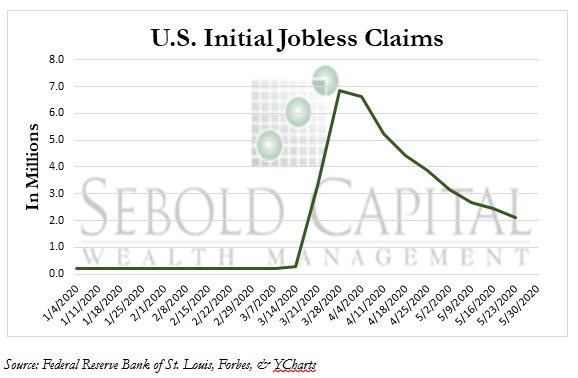