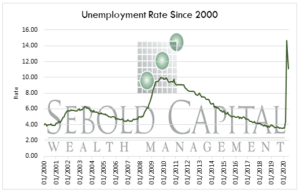 The US Unemployment Rate measures the percentage of total employees in the United States that are a part of the labor force but are without a job. It is one of the most widely followed indicators of the health of the US labor market and economy. Historically, the US Unemployment Rate reached as high as 10.80% in 1982 and 9.9% in November of 2009. Both times were notable recessionary periods.

Unemployment rates continued to fall this past month as businesses across the country reopened and resumed operations. The decrease in unemployment this month mainly reflects the resumption of economic activity that had come to a halt in the months of March and April this year due to the Coronavirus pandemic. The two sectors or areas that contributed most to the decrease in unemployment in June were levels of employment in leisure and hospitality and retail trade. Employment in leisure and hospitality increased by 2.1 million and accounted for nearly 40% of the gain in total nonfarm employment. Just over 1.5 million of these jobs were related to food services or drinking places and this provides some evidence that economic activity and consumer spending is starting to rise again. The other significant factor that contributed to the decrease in unemployment in June was employment in the retail trade sector. Employment rose by 740,000 and included gains of 202,000 in clothing and clothing accessories stores; 108,000 in general merchandise stores; and 84,000 in both furniture and motor vehicle stores. Total nonfarm payroll employment rose by 4.8 million this past month and is a solid indicator that the economy is steadily recovering from March and April, when employment declined by 22.2 million.

Overall, the unemployment rate for June registered 1.2 percentage points lower than the forecasted level of 12.3% thus indicating that employment is recovering faster than predicted. While these numbers are still lower than those from before the Coronavirus pandemic impacted the economy, the increases signify a spike in consumer expenditures that most likely stems from the nationwide rise in personal income thanks to the stimulus plan implemented by the government. Assuming that the economy continues to recover and adjust to the new norm of social distancing guidelines, it is projected that unemployment levels in the month of July will remain steady or fall slightly as over 50% of businesses have indicated that they will be putting a hold on hires until economic conditions improve. 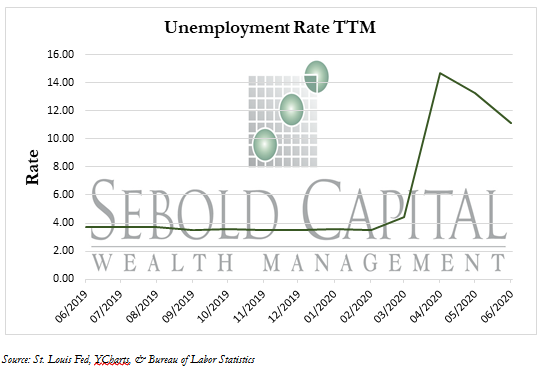