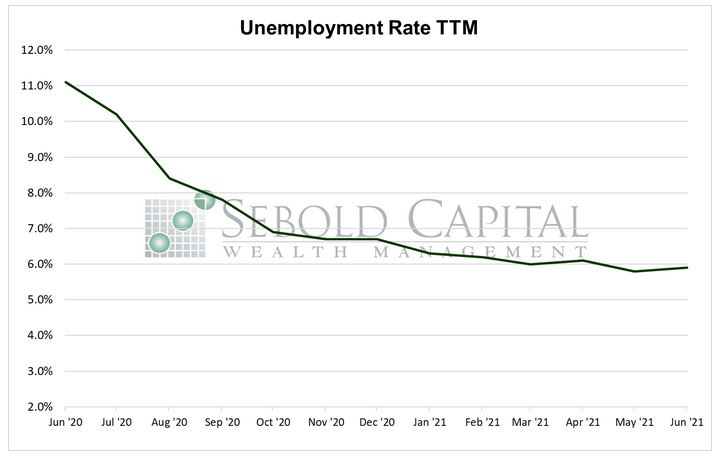 In June, U.S. employment rose by 850,000, beating expectations for the first time following months of missed forecasts. However, the headline unemployment rate increased by 0.1% to 5.9% and the unemployment level rose by 168,000 to 9.48 million. The average workweek declined slightly from 34.8 hours to 34.7. Average earnings increased last month, with hourly earnings rising by $0.10 to $30.4 and weekly earnings advancing by $0.44 to $1,054.90. The labor force participation rate remained unchanged at 61.6%.

The labor market largely improved last month as employers ramped up hiring in order to meet the rising consumer demand which has surged in the past few months as the economy has reopened and many restrictions have been lifted. However, businesses have struggled to find and retain workers, which has been blamed on several factors.  First, the enhanced unemployment benefits provided by the federal government to each state. Since March of 2020, unemployed individuals have been receiving weekly supplemental aid, and while the amount has since decreased (from the original $600 to the current $300), it undoubtedly still exceeds the potential earnings of many entry-level positions. Proponents of this policy have argued that making it more profitable for many individuals to be unemployed does not have an impact on the rate at which they return to work. The labor shortage can instead be blamed on a number of other factors. These include concerns about Coronavirus, a lack of access to childcare, additional burdens in the workforce environment.  The latter also seems like a longshot, as a paper published by the NBER last month found that the impact of childcare obligations on the overall labor market was minimal. (Furman, Jason; Kearney Schettini, Melissa; Powell, Wilson. “The Role of Childcare Challenges in the US Jobs Market Recovery During the Pandemic” Working Paper, National Bureau of Economic Research, 2021. https://www.nber.org/system/files/working_papers/w28934/w28934.pdf).

No one can deny that there is a labor shortage with the employment level around 7.1 million jobs below pre-pandemic levels. In order to combat this labor shortage, 26 states have announced that they would be opting out of the enhanced unemployment benefits before their expiration. In the weeks following the first states’ announcement, the number of individuals receiving unemployment benefits declined at faster rate in states that were ending the program. While correlation does not necessarily imply causation, it would surely be too much of a coincidence that unemployment is decreasing faster in states that no longer provide these enhanced benefits. Last month’s uptick in the unemployment rate could also be attributed to states ending the additional payments sooner. For an individual to be considered unemployed by the BLS (and therefore be included in the unemployment rate), he or she needs to be actively looking for a job. Ending the enhanced UI befits likely encouraged several individuals to begin looking a job, whereas before they would have had little reason to, resulting on them being officially counted as unemployed. Sure enough, the unemployment level rose in June, lending credibility to that theory.

As things stand, the labor market appears to be subject of an economic experiment, the likes of which has seldom been seen before. Unemployed individuals in half of the country will continue to receive an additional $300 per week until September, while those in the other half will not. While it is still too early to fully observe and understand the outcome of this experiment, the data so far appears to favor the states that have phased out the enhanced benefits. Regardless of the root cause, the labor shortage should start to ease in the coming months as vaccinations build herd immunity, schools fully reopen in-person and full-time, and the enhanced benefits expire.