Last week, initial claims sharply declined by 26.03% to 199,000—not only hitting their lowest point since the start of the pandemic but also reaching a 52-year low. Continued claims likewise declined, although by a far less dramatic 2.84%, and they now stand at 2.05 million—also a pandemic-low. Both initial and continued claims are now well below their respective long-run averages of 371,000 and 2.81 million.

Initial claims fell to their lowest point since November of 1969, continuing to reflect the fact that businesses are determined to hold on to their employees. The figure, which serves as a proxy for layoffs, has fallen at a rapid pace as the labor market has tightened and the shortage of workers has intensified. Continued claims have also seen a significant decline, although they remain above their pre-pandemic level. The figure has been declining at a slightly faster rate since the enhanced unemployment benefits expired at a nationwide level in early September. Now that the disincentive to work has been reduced, the labor shortage should continue to ease and whatever staffing challenges remain will likely be attributable to structural factors, such as a large number of older workers choosing to leave the workforce and opting for early retirement. 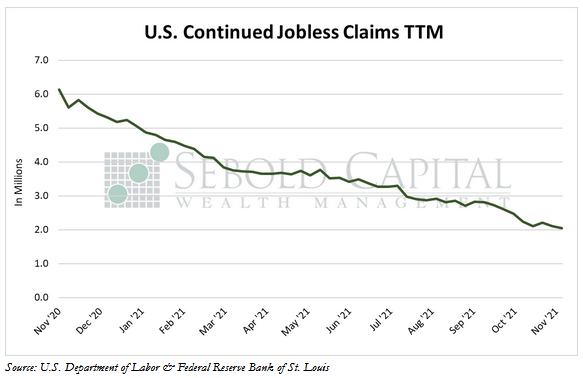