US Initial Jobless Claims, provided by the US Department of Labor, provides underlying data on how many new people have filed for unemployment benefits in the previous week. Given this, one can gauge market conditions in the US economy concerning employment; as more new individuals file for unemployment benefits, fewer individuals in the economy have jobs. Historically, initial jobless claims tended to reach peaks towards the end of recessionary periods, such as on March 21, 2009, when 661,000 new filings were reported.

This week, initial claims fell to the lowest level since the start of the COVID-19 pandemic back in March, even though they largely held steady from the previous week. This drop in initial claims is a positive sign for the economic recovery, particularly after a 75,000 jump that was observed earlier this month. It shows that, even as cases continued to rise, less people were laid off and had to file for unemployment than in the past few weeks. Ever since states began lifting their lockdown orders and businesses were able to reopen, the number of initial jobless claims has been dropping by quite a significant rate—barring a few exceptions—with an average decrease of about 197,000 per week. This is significant because it shows that, at least as far as employment is concerned, the economy has been recovering at a faster rate than expected. However, it remains unclear how the recovery will continue to unfold if new Coronavirus cases keep rising at their current rate. There is a chance that, even as cases continue to rise, the economic impact will not be as significant as it was at the beginning of the pandemic as both people and businesses have become more accustomed to dealing with the new reality created by the virus, but that remains to be seen. 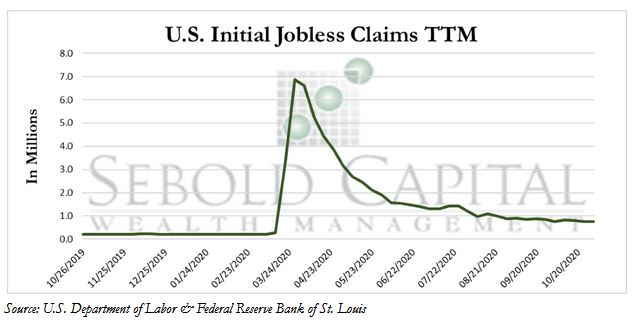