US Initial Jobless Claims, provided by the US Department of Labor, provides underlying data on how many new people have filed for unemployment benefits in the previous week. One can gauge market conditions in the US economy around employment; as more new individuals file for unemployment benefits, fewer individuals in the economy have jobs. In normal times, these means people have less money to spend. Historically, initial jobless claims tended to reach peaks towards the end of recessionary periods, such as on March 21, 2009, when 661,000 new filings were reported.

With the recent uptick of COVID-19 cases, several states are once again imposing restrictions on businesses. This has likely led to the recent increase in the number of initial claims, and the figure may continue to increase if restrictions continue to be tightened. This may seem discouraging at first, but it should be pointed out that the current number of claims remains significantly below the 6.8 million claims filed at the height of the pandemic. The economic outlook has improved significantly since then, and with the possibility of a vaccine in the near future, the number of initial claims will hopefully return to more normal levels. 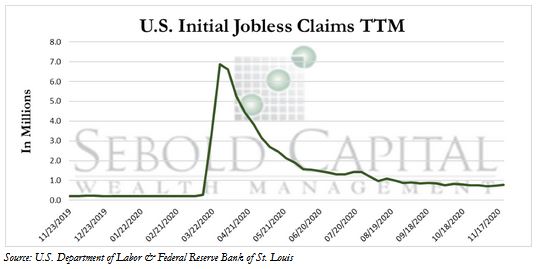