Last week, initial claims reached a new pandemic low, declining by 15.6% to 498,000. This is the first time that the number of claims has been below half-a-million since the start of the pandemic. However, the number of continuing claims actually rose by 0.25% to 3.66 million. The number of both initial claims and continued claims remain above their respective long-run averages of 372,000 and 2.81 million.

Initial claims fell below 500,000 for the first time in over a year as the economy continues to reopen and pressure on the labor market is eased. The leisure and hospitality industry, in particular, has been adding jobs at an accelerated pace recently as consumer demand increases. The number of claims has remained elevated for several factors, including additional unemployment benefits that may discourage people from working, fraudulent filings, and some areas imposing new restrictions to combat spikes in Covid-19 cases. Some states have begun taking measures to prevent fraudulent claims and to encourage people to go back to work. Montana became the first state to opt out of the supplemental unemployment benefits from the federal government and is instead planning to offer a back-to-work bonus. If more states adopt similar measures, the number or claims will likely decline as it will no longer be more profitable for many individuals to be unemployed than to be working. That, combined with more businesses being allowed to operate at full capacity and most remaining restrictions being lifted, will likely allow the labor market to return to pre-pandemic levels. 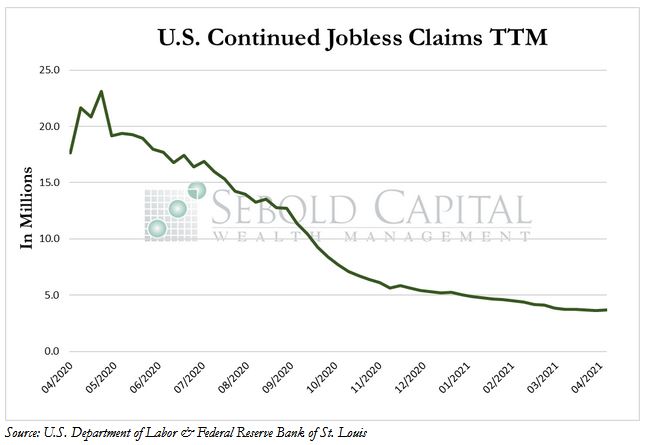