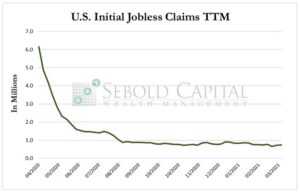 Last week, initial claims rose by 1.4% to 744,000, up from the prior week’s 728,000. This was the second consecutive in which initial claims increased after reaching their lowest point since the start of the pandemic. However, the number of continued claims declined again, falling by 0.43% to 3.7 million. The number of both initial and continued claims remain considerably above their respective long-run averages of 371,000 and 2.81 million.

Unemployment insurance claims rose once again last week despite numerous signs that labor market in improving. Some attribute the increasing number of claims to fraudulent filings and backlogs following the expansion of unemployment benefits by the latest relief package that was passed. The Federal government will continue providing an additional $300 per week to unemployed individuals, which could act as a disincentive for returning to work since the unemployment benefits likely exceed many of these workers’ regular paychecks. Despite the recent rise in the number of claims, the four-week moving average (which smooths out the frequent fluctuations in the data) continues to move in the right direction. The average declined from 762,000 to 748,000 last week, and has been steadily declining since the economy started to reopen. Unemployment claims will likely continue to decline over time, especially as the few remaining restrictions are lifted and the additional unemployment benefits run out—which will give individuals a stronger incentive to go back to work. 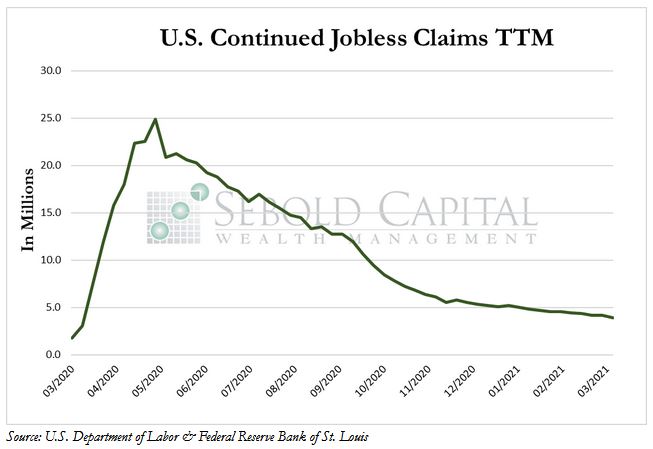