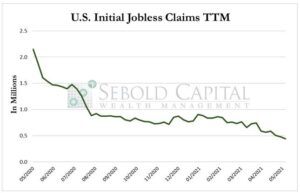 Last week, initial claims reached yet another pandemic low, falling by 7.1% to 444,000. This is the third consecutive week in which the number of people filing an unemployment insurance claim for the first time has been below 500,000. The four-week moving average, which smooths out fluctuations in the data, has now declined to 580,250. However, the number of continued claims rose by 3.05% to 3.75 million, and currently sits at its highest level since mid-March. The number of both initial claims and continued claims remain above their respective long-run averages of 372,000 and 2.81 million.

The number of initial claims continued to decline last week, pointing to improving labor market conditions as the few remaining restrictions are lifted. Less people are being laid off, either permanently or temporarily, than at any other point since the start of the pandemic. However, the number of continued claims—individuals who have filed for unemployment insurance benefits for more than two consecutive weeks—actually increased, signaling that a large number of people are still not going back to work. While there are a number of factors that play into that, one of the main drivers of this continued unemployment are the additional benefits provided by the Federal Government.

Unemployed individuals continue to receive $300 per week on top of the regular benefits provided by their state, which normally amount to half of their pre-layoff wages. For many workers—particularly those working entry-level or part-time positions—it is more profitable to be unemployed than it is to work. It would not be much of a stretch to argue that the additional unemployment benefits are acting as a disincentive for many people to go back to work, especially for those who might have a high preference for leisure. Many businesses have been reporting labor shortages now, even as most restrictions have been lifted. As a measure to combat these shortages, sixteen states (so far) have opted out of the federal programs paying additional unemployment benefits. These states include Alabama, Arkansas, Arizona, Georgia, Idaho, Iowa, Mississippi, Missouri, Montana, North Dakota, Ohio, South Carolina, South Dakota. Tennessee, Utah, and Wyoming. Over the next few weeks, the employment data coming out of these states will show the impact of removing the additional benefits on the labor market. While the results remain to be seen, more people are likely to return to work if they no longer have a financial incentive to stay home. 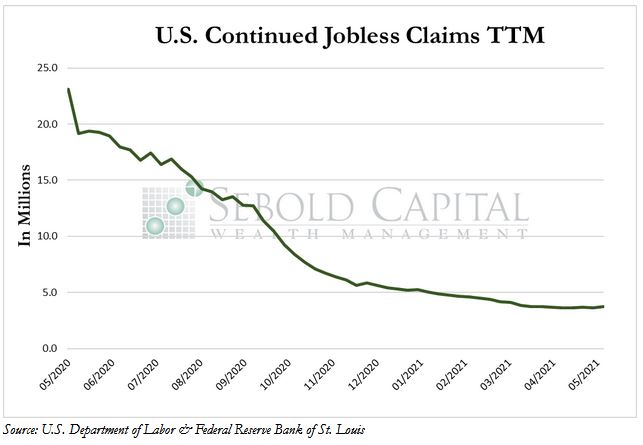