US Initial Jobless Claims, provided by the US Department of Labor, provides underlying data on how many new people have filed for unemployment benefits in the previous week. Given this, one can gauge market conditions in the US economy concerning employment; as more new individuals file for unemployment benefits, fewer individuals in the economy have jobs. Historically, initial jobless claims tended to reach peaks towards the end of recessionary periods, such as on March 21, 2009, when 661,000 new filings were reported.

US Initial Jobless Claims are currently at a level of 898,000, up 58,000 or 6.9% from the previous week. This is an increase of 5,000 or 0.56%% from last month and the number of claims remains significantly over the long-term average of 369,963. (Note: California has not been reporting Jobless Claims for 3 weeks. We can only estimate how adding their projected data is impacting the numbers.)

In the last few weeks, several companies—including American Airlines, United Airlines, and Walt Disney—announced significant layoffs, leading to an increase in the number of people who claim unemployment benefits. These layoffs effected primarily in-person service industries, such as travel and entertainment—which, not surprisingly, are some of the industries that have been most impacted by the pandemic. Despite this most recent turn for the worse, the overall economic outlook and the labor market have seen a dramatic improvement since the height of the pandemic back March and April, when jobless claims reached an all-time high of 6.8 million. Since then, jobless claims have seen a dramatic decrease aided in part by most lockdown orders being lifted and both consumers and businesses regaining a good part of their confidence in the economy.  As the pandemic subsides and consumers return to a more normal spending pattern, the aforementioned industries should be in a position to rehire many of the workers that have lost their jobs, hence improving the economic outlook. 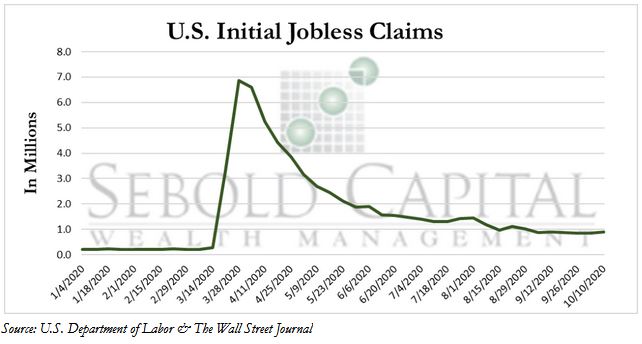