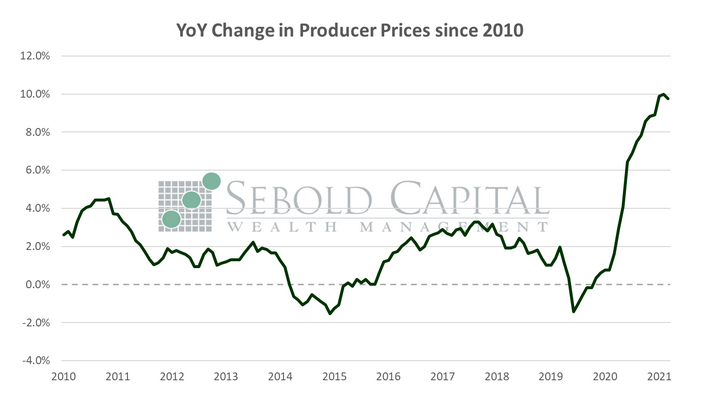 In January, the PPI rose by 1.0% to a level of 133.0, coming in well above market expectations of a 0.4% increase. Core PPI, which excludes prices for food and energy and is therefore considered to be less volatile, rose by 0.8% to an index level of 131.0—also beating forecasts. Year-over-year producer inflation hit 9.8% last month, while core producer inflation was 8.4%.

Prices paid by producers resumed their relentless advance last month, after what misleadingly seemed like a breather in December. December’s monthly gain was in fact revised from 0.2% to 0.4%, yielding a 10.0% advance in producer prices for 2021; ending the year with single-digit producer inflation did seem too good to be true. The year-over-year inflation print in January did seem to dip, but that was mainly the mathematical result of using a high base for the calculation—producer prices had their largest one-month advance in January 2021, so the index saw a large jump that month. Last month’s advance paints a more accurate picture of producer prices, as it is the second highest (so far) since the index was recalculated in 2009. Annualizing that would yield producer price inflation of 12.0% in 2022, while core inflation would hit 10.1%. Let’s see what a few quarter-point interest rate hikes can do about that.

Breaking down the PPI shows where price pressures are most present throughout the economy. Energy costs rose by 2.5% for the month, mainly due to higher prices for diesel fuel and liquified petroleum gas. Prices for services rose as well, with noteworthy advances in the cost of hospital care, legal services, and portfolio management. Prices also rose for vehicle wholesalers and clothes retailers. On the commodity side, prices for most meats climbed sharply, although pork prices did moderate somewhat. Overall, producer prices serve as an indicator that inflationary pressures continue to build up. Firms will likely continue passing on most of those higher input costs to consumers through the year, leading to high CPI prints for the next several months. 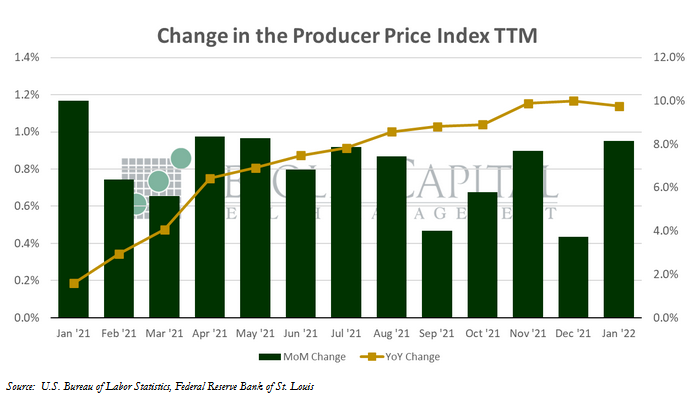